The Early days of proportional radio control began with analogue control systems. The ‘Staveley’ four channel transmitter, receiver and servos was one of the best available during the late 1960’s.  Jean-Marie Piednoir takes a look at the system producing some amazing electronic detail.  It is unlikely that such detail still exists from over half a century ago. 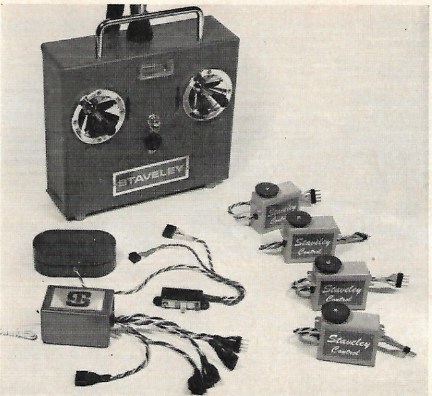 The picture shows the complete Staveley radio control system as it would be taken out of the box. The dual charger for transmitter and receiver is built into the lower Tx case alongside the battery.

The transmitter output is a continuous square wave tone of nominally 500 cycles per second producing a centre position of the aileron channel. Variation of the tone frequency via the aileron joystick moves the aileron servo proportionally one way or the other.

Variation of the mark space of the square wave tone, produces movement of the elevator channel and servo.

The receiver decoding circuitry employs filters that can distinguish between the true ‘Tone’ frequency and the slower pulsing frequency used for channel 3 and 4, Throttle and Rudder.

So all in all, we have a four channel analogue radio control system.

Jean-marie Piednoir has produced the following circuitry of the Staveley 4 transmitter loaned by Phil Green of the ‘Single Channel website’ and R/C museum.

The Staveley 4 was one of the milestones in proportional multi channel radio control model history for sure. 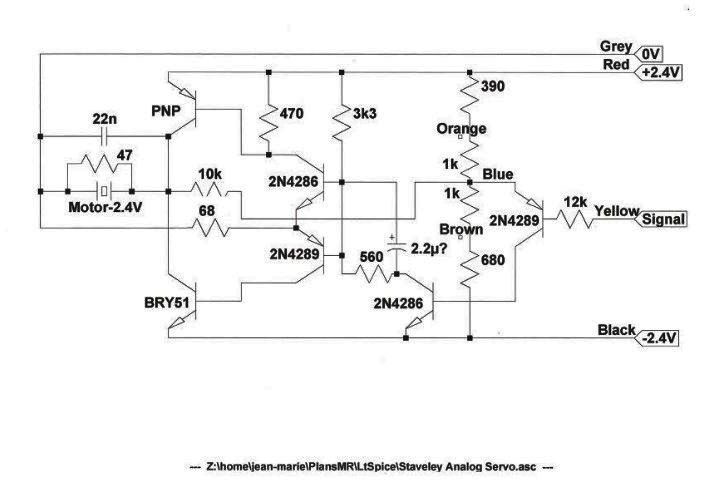 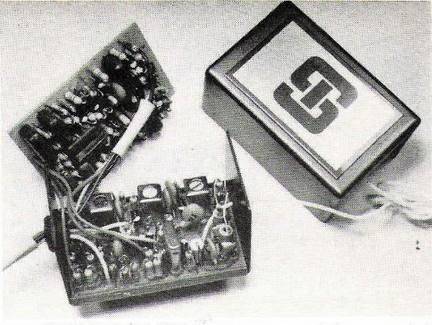 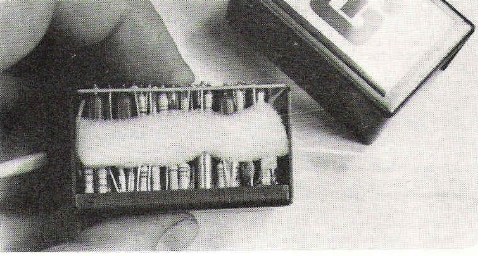 PHOTOS SHOWING THE STAVELEY ANALOGUE SUPERHET RECEIVER. FOUR FLYLEAD SOCKETS EXTEND FROM ONE END OF THE CASE FOR SERVOS.

27 MHZ WITH SOLDER-IN XTAL. SO ONLY ONE INDIVIDUAL CHANNEL FREQUENCY TO ORDER.

Many thanks to Jean-Marie Piednoir for his input. The reading of electronic circuitry from existing hardware is extremely difficult and very few people have the art of doing this.  Many Thanks J-M. 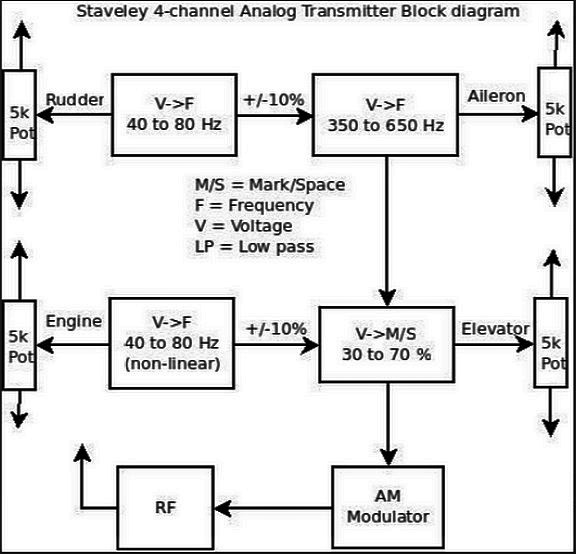 The heart of the system is the variable frequency oscillator with a frequency centred on 500Hz variable over the range 350Hz to 650Hz under the control of a voltage defined by the position the Aileron Stick potentiometer.

The square wave output from the 500Hz centred oscillator then subjected to 30 to 70% mark to space variation under the control of a voltage defined by the position of the Elevator Stick potentiometer.

The degree of mark to space variation is similarly varied by a separate low frequency oscillator centred on 60Hz and variable over the range 40Hz to 80Hz under control of the Throttle Stick potentiometer in a manner similar to the Rudder control  described above.

The complex modulation waveform following the composite mark to space modulation is then applied to the RF modulator (another box needed) and thence to the 27MHz rf. Generator. 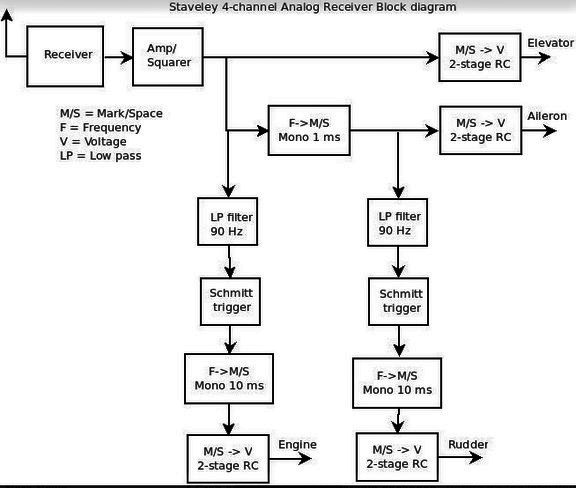 Before describing the decoder circuit it is necessary to understand that, although frequency variation or modulation is involved for three of the four functions, frequency to voltage conversion is not used to provide the dc voltages necessary to drive the analogue servo amplifiers. The trick is to use detected pulses to trigger monostable circuits with periods equal to approximately half of the mean periods for the centre frequencies. Thus, the nominally 60Hz modulated signals trigger 10mS duration monostable circuits and the nominally 500Hz modulated signal triggers a 1ms duration monostable. By this method frequency modulation is converted to mark to space modulation and thence to a mean direct voltage level for application to a servo amplifier circuit.

The demodulated signal from the 27MHz receiver is applied initially to an amplifier/squarer circuit to ensure that all pulses are of full amplitude. Following the squarer circuit, the signal is directly applied to a low pass active filter circuit with an abrupt cut off at 90Hz. The filtered output signal is then ‘sharpened’ by a Schmitt trigger circuit to produce full amplitude pulses which in turn trigger a 10ms period monostable, thereby converting a variable frequency signal to a variable mark to space signal and thence to a mean dc level (dependent upon mark to space) to drive the Throttle servo amplifier.

The output from the amplifier/squarer circuit is also fed directly a mark to space to voltage conversion circuit to provide a mean dc level to drive the Elevator servo amplifier.

The unfiltered output from the amplifier/squarer circuit is also used to trigger a 1ms period monostable thereby converting frequency variations centred on 500Hz into variable mark to space and hence to a direct voltage to drive the Aileron servo amplifier.  The 1mS monostable output is further applied to a low pass filter/trigger/ 10ms monostable/ mark to space/ chain identical to that for the throttle control. By this means a direct voltage to drive the Rudder servo amplifier is extracted from the low frequency modulation of the variable frequency oscillation, centred on 500Hz, produced by the Aileron Stick.

The overall control system appears to be very ‘Heath Robinson’ in concept but there was probably little else which could be done in the 1960s. Heaven knows what a six-channel system would have involved. It is apparent why the so-called digital control system prevailed.

John-Marie Piedmore’s production of the above schematics must have involved much effort and in support of with this he employed LT Spice to display waveforms at various points of the transmitter circuit and to display the frequency response of the low pass active filters in the receiver circuit.

LT Spice VII is a powerful ‘free to use’ circuit analysis programme formerly provided by Linear Technology and currently by Analogue Devices.

The example of its application shown below is a simulation of a simplified  version of the 500Hz master modulation oscillator, depicting the waveform at the collector of transistor Q3.

As can be seen the output of the oscillator is a linear saw tooth waveform.

In further simulations, subject to a total 5k Ohms, values of R9 and R10 may be mutually varied to demonstrate the frequency range provided by the Aileron stick.

Hello, we are still working on this page at the moment, Thanks for reading 🛩🛩