Undoubtedly the Hill receiver was an improvement on its predecessor the IVY receiver but the use of two separate DL91 or DL96 valves resulted in a bulky assembly. 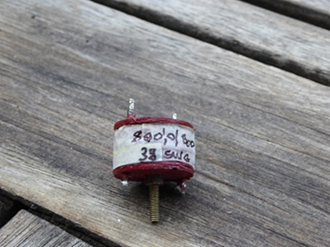 A second version of the Hill receiver used a DCC90 double triode, and the author succumbed to a nostalgic urge to attempt to recreate this version in a ‘compact’ form.

A major difficulty in the construction of super-regenerative receivers which employ thermionic valves is the necessity to wind a quench oscillator transformer. That used for the re-creation having 800-0-800 turns which when tuned by 1000pF oscillates at 50kHz.

It is also necessary to wind a suitable r.f. choke and the essential 27MHz tuning coil. These actions were undertaken prior to the construction of a receiver on an s.r.b.p. board of 4cm x 9cm.

In the Hill circuit one valve operates as the super-regenerative receiver and the other as a switch to operate the electromagnetic relay used to control the rudder actuator or escapement.

To drive the control grid of the second valve the waveform from the quench oscillator is applied to a voltage doubling rectifier and the negative voltage produced is used to bias off the valve.

On the receipt of a signal from a transmitter the 27MHz oscillations which build up in the active part of the 50kHz quench waveform to such a degree that the amplitude of the quench waveform diminishes. This causes the negative bias applied to the second valve to reduce and consequently permits it to turn on and energise the relay coil in its anode circuit. However, an inevitable 27MHz component present in the quench waveform reduces the effect if rectified; an effect countered the use of Selenium rectifiers with poor frequency response in the original design.

However, with available silicon rectifiers the grid bias for the second valve drops from -2.37V to -0.12V in the current experiment – enough to turn on the valve into a couple of milliamps through a relay coil resistance of 3.3k Ohms but disappointing with respect to the 5 to 7mA claimed for the original Hill receiver.

Because of the remarkable sensitivity of super-regenerative receivers it is impractical to connect an oscilloscope probe to the r.f. section of the circuit. In consequence 27MHz oscillations are monitored with a single turn pick up loop around the coil former.

Below loop pick-up 27Mhz waveforms for no signal and for the presence of a weak 27Mhz signal, respectively. From the former, in the absence of a signal, the 27Mhz oscillations are quenched before they have time to build up to significant amplitude. 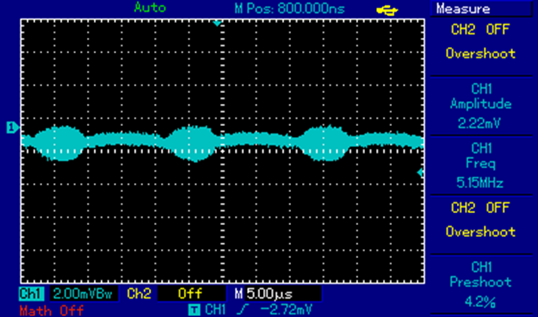 However, in the presence of a weak 27MHz signal the oscillations build up rapidly during the enabled period. 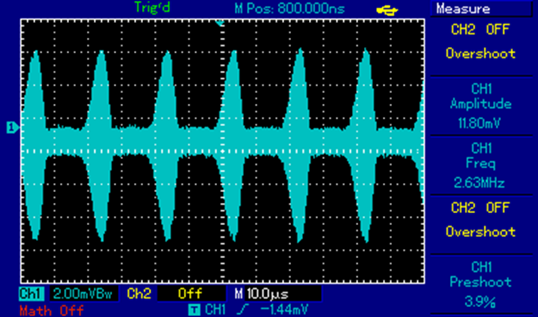 Below these are the relative waveforms for the quench oscillator with and without a signal.

With signal the amplitude is about 15V. 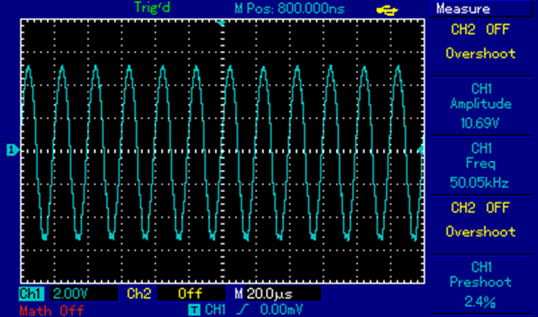 With no signal the amplitude is about 10V

The presence of a low level of 27MHz oscillation is just apparent in the peaks of the negative half cycles of both waveforms. The waveforms displayed are acquired using 50MHz digital oscilloscope and it is thought that the 27MHz component of the waveforms is greater than is indicated by them. An analogue scope of only 10MHz bandwidth shows a much higher 27MHz content. The author is uncomfortable with the use of digital oscilloscopes for mixed waveforms.

The complete receiver is shown in the following photographs. Ideally components contemporaneous with the 1950s design would have been used for construction but non availability has dictated the use of components of more recent manufacture. It was intended to use a simple REP lightweight relay but sadly the coil had become open circuited in the 60 or so years since it was last used. The author doubts his ability to wind a new 4,000 Ohms coil in 46 swg. copper wire so a heavy and bulky ED polarised has been substituted. 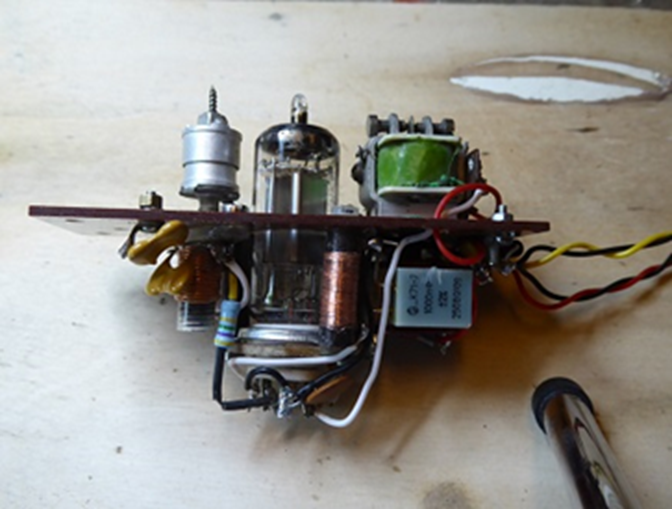 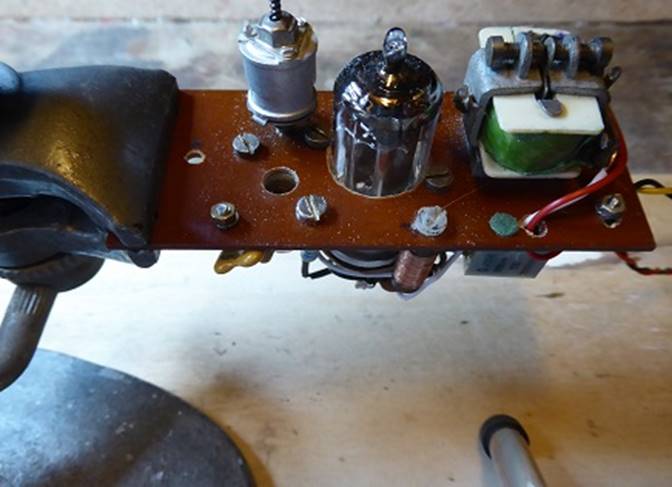 In view of the fact that the achieved relay current is less than expected it is probably worthwhile to experiment with the silicon diodes of the voltage doubling rectifier. Possibly small shunt capacitors will reduce the effect of the 27MHz component in the quench waveform to further reduce the negative grid potential on receipt of a signal.

To investigate whether Selenium diodes might have given a better result, the Silicon diodes were each shunted by 22pF. This produced an insignificant reduction of negative grid bias for the relay valve.
With this evidence it was decided to plot the relevant anode voltage vs. anode current characteristics for one half of the DCC90 double triode.  These are shown below: -

A 4k Ohms load line to simulate the relay coil resistance is superimposed on the characteristics and from which is apparent that the relay current cannot exceed 2mA. 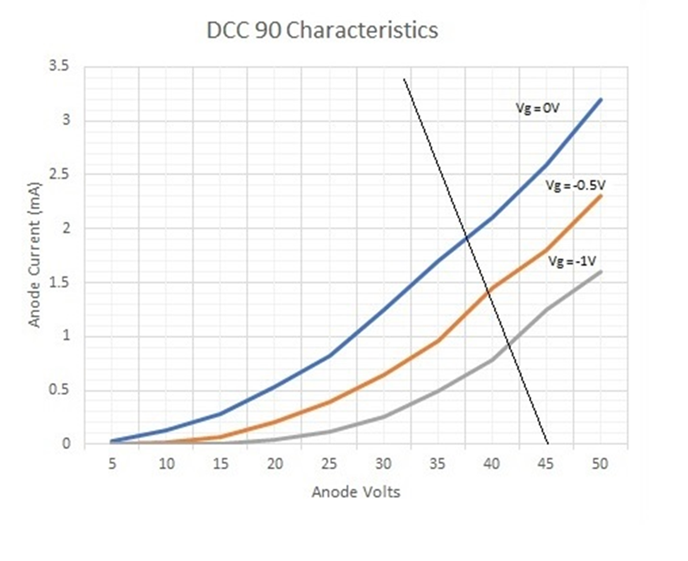 The Hill receiver was a significant improvement on the early single valve radio control receivers in which a reduction in the valve anode current on receipt of a signal caused a relay to partially de-energise. The employment of the concomitant reduction in the amplitude of the quench waveform to turn on a second valve resulted in far more positive, off -on, relay operation which justified the extra, weight, bulk and power consumption.

Instead of operating as the result of a small drop in current the ‘Hill’ relay was positively energised by a current of 5 to 8 mA when a second DL92/96 triode strapped pentode valve was used.

Double valves such as the DCC 90 /3A5 became available and the natural development would be to gain the obvious advantages of having both of the Hill valves in a single envelope. However, the characteristics of the valves within in the DCC 90 envelope did not match those of the separate DL92/96 valves and thus were only able to provide a couple of milliamps or less to operate a relay, as demonstrated in the foregoing.

Co-author, Terry, remembers building a ‘single’ valve version of the Hill in addition to an earlier one which employed separate valves and that it produced a healthy relay current. This begs the question as to, if not the DCC90, which valve was used at that time.?

Many Thanks for reading ... David Caudrey