Some years past my friend Dave Warren gave to me an excellent model of a Thames Police Launch which he had built in his younger days. It was ‘powered’ by a large and heavy wound field motor of a type which was available in the 1950s. With zinc 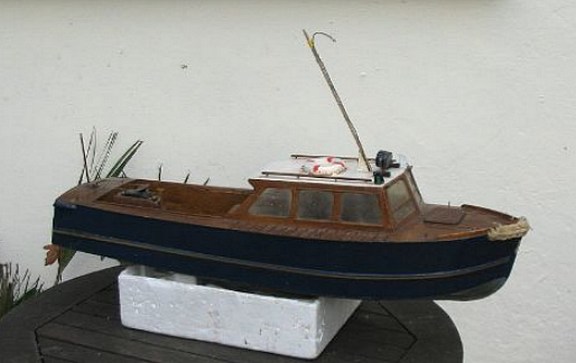 carbon cells as a power source, and without means for remote control, its operation must have been somewhat limited. However. it was an excellent prospect for the installation of a more efficient motor and the incorporation of radio control. With this objective, 400 size motor was fitted with 5:1 reduction gear to drive the propeller shaft via a universal joint; the reduction being effected by sweating a lay-shaft/bearing assembly to the motor case. This arrangement gives realistic performance when powered by 6NMH or two LiPo cells.

As these modifications were made 15 years ago or more, two channel 27MHz. radio gear was installed with a standard servo for the rudder and one of Terry’s Micron ESCs. for speed control. (see page 11 for Micron ESC detail).  This combination was effective, but it had a shortcoming in that it was not possible to reverse the motor to free the propeller from weed or algae, - a frequent problem in summer - or to recover the launch if it ran aground. Looking for a lockdown project and wishing to retain the two-channel radio, I decided to examine whether the motor could be reversed sequentially each time the throttle was closed. Some checks were carried out with several ESCs and it was apparent that the motor ceased to rotate before the closing throttle stick reached the end of travel. Tests with an oscilloscope indicated that the effective ESC. dead region was typically about the first 150us of a servo pulse. A logic circuit was designed to detect when the stick was in this dead region, but it was more complicated than was comfortable and very dependent on the individual receiver/ESC. combination and thus not easy to replicate. It was therefore decided to detect the throttle fully closed position electro- mechanically; employing a parallel (slave) servo, notched wheel and a microswitch. Thus the micro switch could be used to trigger a bistable (flip flop) circuit for alternate full closings of the throttle stick position and that the bistable circuit could in turn be used to energise a 2PCO relay connected to reverse the polarity of the motor connections. At this juncture Terry observed that the flip flop and relay would be superfluous if a suitable 2PCO p 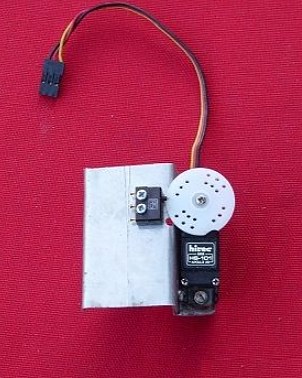 ush-push micro switch could be sourced and operated directly by the slave servo. However, we must not let common sense get in the way of a fun project.

It may be observed from Figure 1 (above left) that the micro-switch is mounted on an aluminium deck attached to the servo. In fact, the servo body is plugged into a plywood 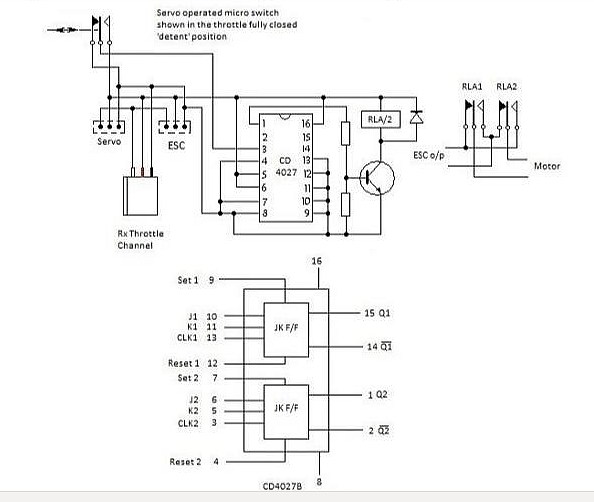 receptacle on which is mounted the deck, facilitating its removal for work to be carried out on the deck with respect to the installation of a circuit board and relay. The plywood receptacle may be glued to the bottom of the cabin floor for installation.

Figure 2 is a schematic of the sequential reversing circuit. Shown right.

As can be seen from this schematic, sequential operation is effected by one half of a CD4027 CMOS dual flip flop integrated circuit operating the relay via a single stage 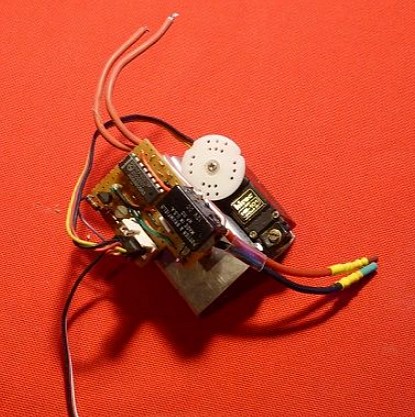 transistor amplifier. The relay is thus energised every other operation of the micro-switch only in the fully closed position of the throttle. Bringing the boat to a standstill will not operate the relay and forward motion is be resumed when the throttle is reopened. Because the relay contacts are not required to switch the motor current only to carry it – switching being carried out at near to zero current – it is possible to use a relay small enough to be mounted on the deck and a suitable Potter and Brumfield relay was found in the ‘goodies’ box. This was installed on a stripboard circuit, with the other components, for attachment to the aluminium deck as shown left. 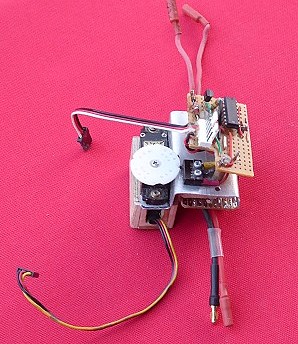 The arrangement shown was bench tested successfully and it was amusing to see a loose motor jump this way and that following full closings of the throttle stick. However, when the unit was installed in the launch disaster struck. It is not easy see the motor terminals in the boat 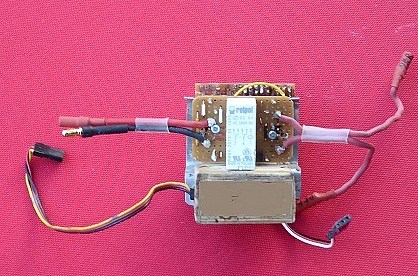 and I had forgotten that a diode was soldered across them. Consequently, smoke was apparent the moment the throttle was opened in reverse, resulting in destruction of the relay. Thankfully, the Micron ESC survived the short-circuited output.

A replacement relay was obtained but, because its pinout is different from that of the original P&B device, it was necessary to mount it on a separate board which is attached to the underside of the aluminium deck as shown in the pictures. 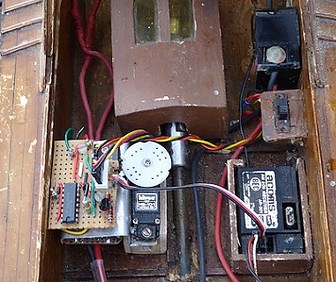 The reverser was positioned in the launch for testing and found to operate reliably; the 5V receiver supply provided by the Micron ESC being capable of supplying the additional 80mA required to energise the relay.

The next picture (Left) shows the reverser positioned for testing roughly where it will be permanently installed in the launch. The arrangement necessarily looks un-nautical for testing, but the electronics can be housed under a dummy locker/coaming like that for 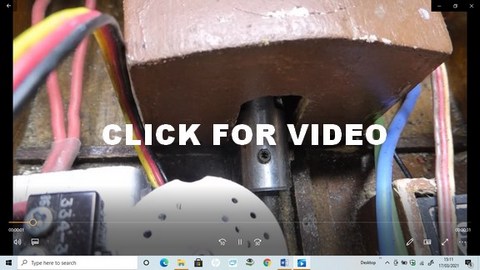 the main motor if it is wished to hide them.

Through membership of SAM 1066 the author was privileged to meet some of his boyhood aeromodelling heroes including Phil Smith, the designer of the Veron Police Launch.  Phil and his current wife (he married four times in his long life) used to turn up to Middle Wallop meetings with their caravan accompanied by their pet duck Jemima. Phil carried on chasing free flight models downwind into his nineties always immaculately dressed and looking fit despite having had his heart valves replaced.

I mentioned the police launch to him and he said that it had been popular, and he showed me a photo of about twenty examples gathered at a Bournemouth model club meeting. He mentioned that the prototype was powered by an ED Bee Diesel engine which gave sparkling performance but was very messy.

Apart from being familiar with his name on Veron model aircraft plans I can recollect a local paper photograph of him in RAF uniform being presented with the Queen’s cup by the Queen (latterly HM the Queen Mother) at Langley.