THE NEXT TWO PROJECTS ARE ORIGINAL DESIGNS FROM DAVID CAUDREY.

SERVO OUTPUTS FROM DIFFERENT MAKES OF RECIEVERS vary in voltage from around 3.6 volts to the full rail voltage of 5.0 volts. This variation does not matter with many different servos but it can effect the operation of some electronic speed controllers (ESCs).  The following in-line circuit from the receiver to the ESC produces a full 5volt output which is compatible with any ESC used. (DC Feb 2012).

ELECTRONIC SPEED CONTROLLERS ARE NOT SO CAMPATIBLE WITH SOME R/C SYSTEMS (PART 2 ! )…. a story relating to the Futaba FASST 2.4GHZ system).

The measured servo pulse amplitude from the Futaba FASST 2.4 GHz receivers is only about half of that from a Futaba 35MHz receiver, which is effectively rail to rail. Although the reduced amplitude is apparently sufficient for servos I guessed that might be insufficient for the speed controllers which tend to be more analogue in operation. I cobbled up an in-line buffer for the throttle channel of the receiver (see above) to provide clean rail to rail pulses for the ESC. only to find that it still didn’t work! Looking at the waveforms a bit more circumspectly I realised that the Futaba FASST 2.4GHz transmitter sends its string of data at more than twice the rate of that for the Futaba 35MHz transmitter which I was using for comparison (8.5ms frame period as opposed to 18ms for the latter).  I conclude therefore that the FASST data rate is too high for ESCs not specifically designed for it.

OK….Ok….let’s look at this. The servo pulses from the outputs of the Futaba FASST 2.4 GHz system receiver are being delivered around twice as fast as most other radio control systems. Mmmm….and this is upsetting some Electronic Speed Controllers….so, what if! we could devise a way of deleting every other servo pulse……..if this could be done, then a ‘normal’ speed of servo pulses would arrive at the speed controller! Well once the idea had clicked in with us, DC had come up with an circuit!! :-

The above circuit has now been tried and tested and completely solves the problem of the ESC working from a Futaba FASST 2.4 Gig radio system. it may well be a quirk of the Futaba FASST 2.4 GHz system that Its servo pulses are transmitted twice as fast as our ‘historically normal’ R/C systems of the past 50 years or so. However if other 2.4 GHz systems follow this pattern then perhaps many existing electronic speed controllers could well be seeing problems with the New Wave of 2.4 Gig radios. A surface mount version of David’s plug-in converter could well sell thousands. (a nice little earner!).

Circuit left to right starts with a 30 inch flex wire aerial exciting the top-coupled double tuned front end. The gate of the Jfet mixer sharesboth the Aerial input and the on board crystal oscillator input. The 455KHz component of the mixing process is captured by IF coil feeding a ceramic filter. This filter selects the 10KHz parent transmitter signal, rejecting all other Tx transmissions. A further ‘mechanical’

filter helps with out of band transmissions that the low cost ceramic filter could find difficulty dealing with. The MC3357 ‘Narrow Band Frequency Modulated’ chip takes over at this stage producing clocking pulses to a MC4015 counter decoding chip. This receiver had seven servo outputs.

This signal is fed to the gate of the Jfet Mixer. Also the on board oscillator (455KHz down from Tx signal) is injected via a 1p capacitor. The 455KHz component of mixing is selected by the IF coil and feeds an impedance matched input to the single 455KHz ceramic filter. This filter is an improved version of that

used in Fleet’s Standard receiver. A second Mechanical filter would not be an advantage. The MC3361 NBFM chip takes over at thi stage producing clocking pulses for the MC4015 counter chip. Four channels are decoded to drive the servos.

(note that the standard receiver decoder has a synchronized reset whereas the ‘resets’ are grounded on the Mini version).

Of interest with both of Fleet’s receiver circuits is the interesting use of such a tiny oscillator injection to the gate of the Jfet mixer (i.e. the 1p coupling capacitor).  More popular ‘text book’ methods would use a healthy oscillator swing into the source, letting the received signal in at the gate. Fleet’s

for radio control receiver testing at the time. Another interesting finding by David Caudrey is that in both receivers the Jfet is effectively

used ‘Upside Down’ i.e. the source and drain are not in their ‘text book’ positions. It is difficult to suggest an advantage for doing

Fleet Control Systems offered one of the first ‘Digital’ servo kits based on the Ferranti ZN419CE servo chip. There is little history to the Ferranti chip. There seems to be no ‘Phil Kraft’ or ‘Doug Spreng’ type name involved in its development. Perhaps Ferranti’s involvement with military defense electronics did not need the input. Ferranti Electronics was forced into bankruptcy in 1993 after a takeover of a dodgy company! We have some information on the Fleet Servo Kit including a reverse engineered circuit by David which is as follows….note that many of these ICs are still available on the internet. 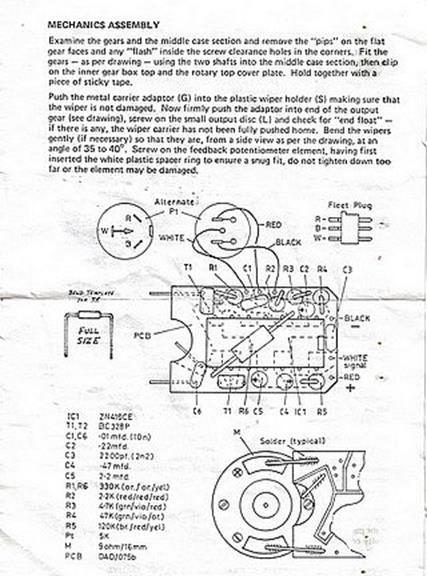 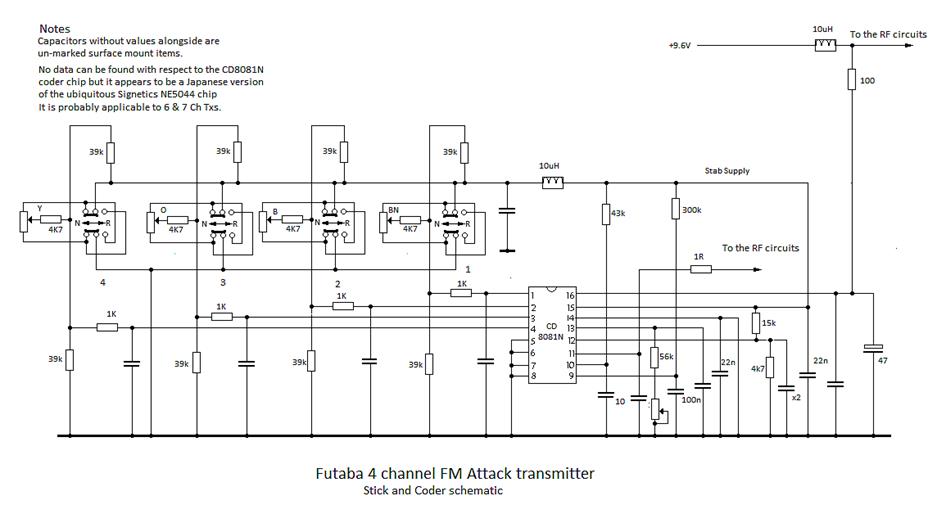 The following text is from one of the homebrew R/C sites :-

A large number of R/C modelers are electronics literate to a certain extent. Those who have an understanding of electronics can easily gain the three (3) missing channels of their typical 4 - channel transmitter if it uses a Phillips NE5044 or the older Signetics number CD8081.

To enable an additional channel, one of the pins, either 5, 6, and 7, must be freed. These pins are grounded by Futaba to disable the unused channels. Once freed, components can be added to utilize the channel.

This reverse engineered circuit of David’s is interesting in that it is taken from an available manufactured circuit board. The main feature dating this circuit is the use of germanium transistors. The first two producing a 1KHz tone, switching the P.A. stage when the button is pressed.

The lack of slower switching to the 2G381 and lack of aerial harmonic filtering and the use of germanium transistors suggests a manufacturing year of around late 1950s to early 1960s. UPDATE feb 2012…seems like it was a McGregor Tx

AN INTERESTING SIGNAL GENERATOR CIRCUIT. A BLAST FROM THE PAST! ∆

There were several similar really well made simple Signal Generators of this type, available around this period. Well cased in fully contained pressed Steel casings with wonderful ‘new’ Hammerite’ type crinkle coatings! When left switched on for half an hour or so to heat up and ‘settle down’ they proved to be an invaluable part of Radio Control Circuitry Development.

The RF Oscillator appears to be  a type of shunt-fed Colpitts using both halves of the 6J5 double triode in parallel despite the highest frequency coil being separately in series with one anode. Through the action of grid current and the unidentified coupling capacitor and the 390k grid resistor the oscillator self biases itself in to class 'C' operation with the valves passing current only for the positive-going half cycles of the oscillatory frequency. The output, taken from the common cathodes, is therefore rich in harmonics and effectively extends the frequency range to 200MHz or perhaps 300 MHz. This appears to be a bit of a fiddle but the trick was used on some more expensive generators.

The 400Hz Audio Oscillator for modulation is an RC phase shift oscillator using the LH half of the 12AX7 double triode. It is unusual that it employs 4 x 45 degree shifts instead of  the more usual 3 x 60 degrees. It  produces a very pure sine wave output . The RH half of the of the 12AX7 acts as a cathode follower output with the RF Oscillator and its supply as the cathode load. The RF Oscillator is thereby anode modulated at 400Hz.

Some modelers use the Paxxon micro circular saw (os similar) for cutting balsa and spruse strip. The circuit above 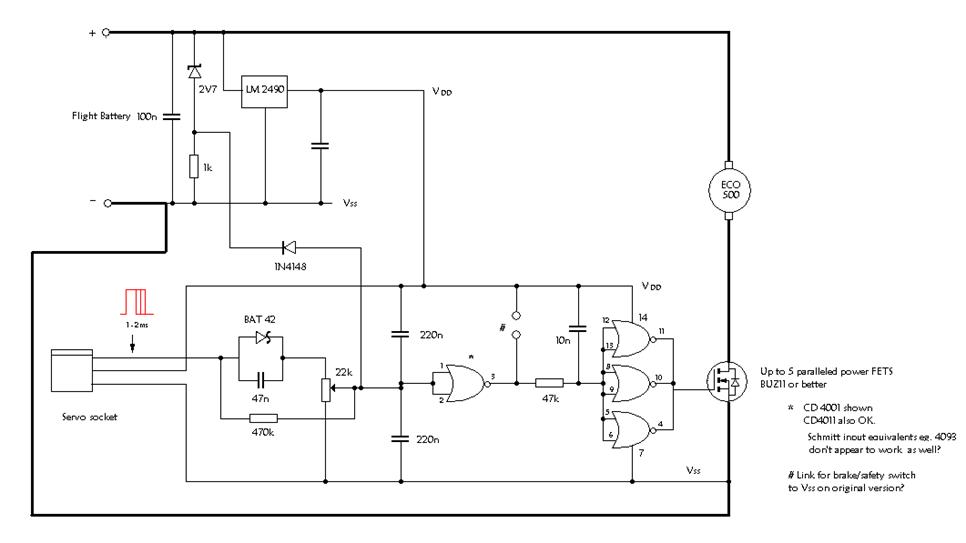 10 to 40 amps with good FETs. Must be logic level input FETs.

The typical installation of this speed controller is shown in David Caudrey’s powered glider Page18.

used in this circuit. So select these with a volt drop close to 2.0 volts. (some of the later LEDs use a much higher volt drop and are not suitable).

PEAK DETECT CHARGER CIRCUIT. ∆ for nicad and NH type batteries. Many of these batteries are still used by model fliers and model boat people.

David points out that new cells/batteries, should have a first normal timed charge and discharge before using this circuit.

PAGE STILL BEING MODIFIED………….thanks for reading!