David Caudrey takes a look at hobby electronics before the age of transistors.

My co-author Terry and I were into model aircraft at an early age. When I was at school, I thought that to be able to control a model aeroplane by radio was the ultimate goal and I read everything on the subject in the Aeromodeller magazine. I understood little of what I read but it didn’t dampen my enthusiasm. Certainly, I couldn’t afford the commercial gear which was available at the time and if I was going to do radio control, I was going to have to make it myself. (Terry probably got there well before me with the help of the local radio repair man!)
Anyway freshly demobbed from National Service in the RAF, where I had learned a little about radio and electronics, I felt ready to have a go.
I purchased a cheap signal generator and made a simple 2kΏ/V multimeter and eventually I bought a simple absorption wavemeter suitable for 27MHz.
With this limited test gear I made a 27MHz transmitter (see page 8 of this site) and soft valve and hard valve receivers (see page 17 and others).
However, with no crystals, operation in the 27MHz band was less than ideal.
Only one model could fly in quite a wide area and a proclivity for the receivers to latch on to interfering signals caused problems. It was at this time that I learned that model control at 459MHz. was permitted and that it didn’t appear to be used. With the enthusiasm of youth, I naturally wondered if I could construct a 459MHz. system. I was aware of Lecher lines and the possibility of ‘measuring’ frequency with a ruler was certainly appealing.
The only available uhf. valve (tube) suited to low voltage battery operation was the 958A acorn valve and consequently an example was acquired from a government surplus dealer. I was aware that the 958A was specified for operation up to 350MHz. but this is in connection with its use as a transmitter valve, and I wondered if oscillation could be achieved at higher frequency but lower level, which would be ideal for a super-regenerative receiver. Of course, with little experience and without suitable test gear, I didn’t stand a chance but my curiosity about feasibility has never been lost.
Recently I discovered that the 958A is available from Vacuum Tubes Inc. of New Orleans and ordered an example. It was not expensive but packing and dues treble the cost in the U.K. The valve arrived promptly, new in the box which it was placed in April 1944.
Ad hoc holders for acorn valves are unobtainable so it was necessary to make something for installing what is an awkward component in a circuit. The result, which is shown in photographs below, employs the sockets from a B8G valve holder. It was not entirely satisfactory because, protruding below the mounting ring, it was too easy to dislodge the valve from the socket when the assembly was placed on the bench. This situation was improved by fitting the chubby ‘O’ ring as shown in the following photographs. 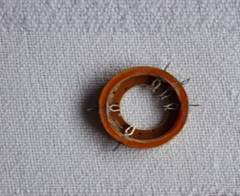 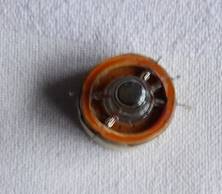 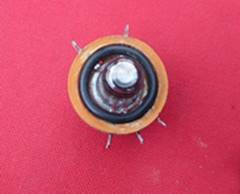 Having mounted the valve, I schemed out the circuit below and constructed it with what I had to hand in the way of contemporaneous components. 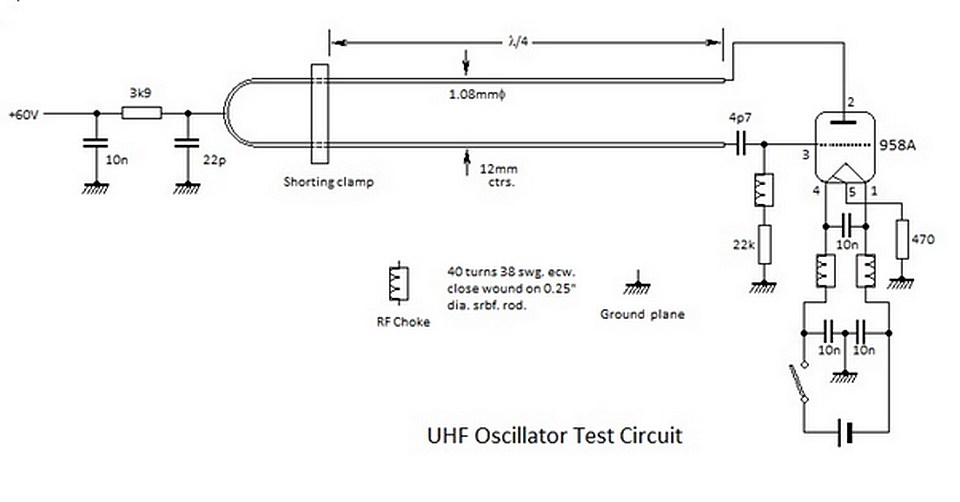 The schematic shows the basic UHF oscillator circuit with provision for inclusion of a controlling quench oscillator. Critical dimensions of the line are identical those of the passive line described in page 22 of https://davidcaudrey.me.uk with a target impedance of 330Ώ and velocity of 0.9c. However, this line differs in being suspended above an earth strip. 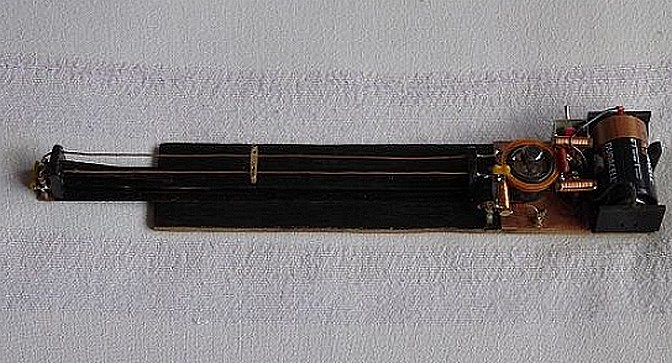 It can be seen from the photograph that the line is extended to cover operation at 300MHz, the highest frequency which I am able to display and measure currently; the brass object being the clamping bar which determines the active length of the line.
When switched on and set for just below 300MHz squeg free sinusoidal oscillations were observed on the oscilloscope and the recorded frequency was 291MHz. Actual amplitude measurement was not tried because of the dc. potential on the line, the probe tip and its ground return lead being merely connected to form a pick-up loop. However, the oscillator was clearly doing what was expected of it.
So far so good, so the clamping bar was repositioned to define an oscillation frequency in the region of 600MHz. With no available means for measurement,
oscillation was confirmed by a simple absorption wavemeter as shown in the following photograph. 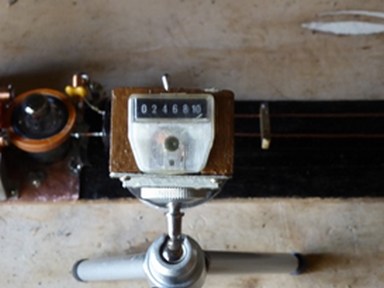 The wavemeter is Checker 1 which is untuned except that it has a helical aerial proportioned for 2.4GHz monitoring. A schematic for it is shown in Page 22 of this website. Checker 1 is the forerunner of Checker, 2 a version tuned to 2.4 GHz. shown in page 27. Happily, Checker 2 is blind to the emanation from the line!

Further development.
Expenditure with respect to the purchase of a 500MHz oscilloscope certainly can’t be justified but an inexpensive frequency counter is certainly a possibility.
However development to include an integral quench oscillator will be a target.
If this is successful the Lecher line will be replaced by a compact tuned LC circuit and means for the detection of a 100% modulated incoming signal with be developed. The latter probably will involve an additional valve or contemporaneous transistor.

To produce super-regenerative receiver circuit a quench oscillator will be required, and the following figure indicates a likely circuit configuration :-

The obtention of a frequency counter permitted confirmation of the line parameters and a frequency of approximately 345 MHz was recorded, as shown in the following picture. 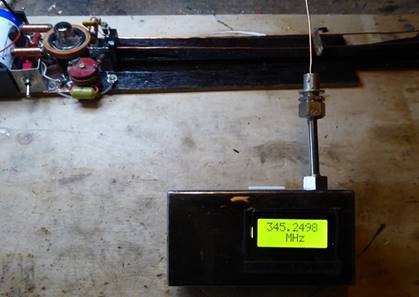 The quench coils are apparent in the photograph but of course they are disconnected for frequency measurement.
The capability of non-intrusive frequency measurement permitted an assessment of the Lecher line parameters to be made and consequently the shorting bar was repositioned to give an indication of 300MHz.
The line length for this indication was found to be 22.5mm which corresponds with the expected propagation velocity of 0.9c.
It is reasonable to assume therefore that the line impedance is close to the target 330 Ώ.

The quench oscillator coils depicted in the development schematic and in the photograph are of the type employed in 27Mhz. receivers of the 1950s, typified by the Ivy and Hill receivers mention in Page 17 of this site, i.e. 3mm wide pancake windings between Paxolin  or plywood discs held together with a brass 6BA screw.
It was soon apparent that these were unsuited to use in the convenient cathode driven Clapp type circuit shown because of inadequate interwinding coupling and that a more conventional anode driven oscillator configuration would be need to be employed.

For the record the basic parameters are: -

The total  series inductance (primary plus secondary) was found to be 8.25mH
which indicates that the coupling factor between windings is less than 20%.
(Perhaps it would be greater with a steel clamping screw!)

Accordingly, the circuit was rearranged to the form depicted in the following schematic: - 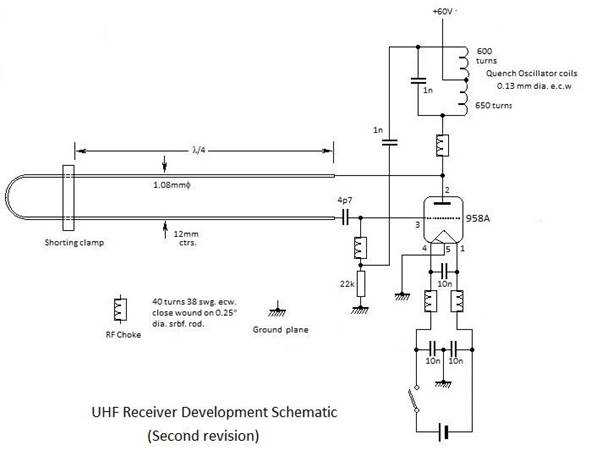 This oscillated as expected at 50kHz, controlling the output of the radio frequency oscillator as shown below: - 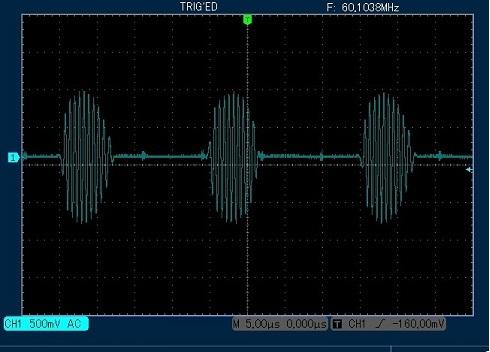 As is usual with super-regenerative circuits, a loop pick-up was necessary and consequently the voltage scale is arbitrary.

With the quench disconnected the following waveform was obtained for the r.f. oscillator running at 260MHz. i.e., within the 300MHz bandwidth of the oscilloscope. 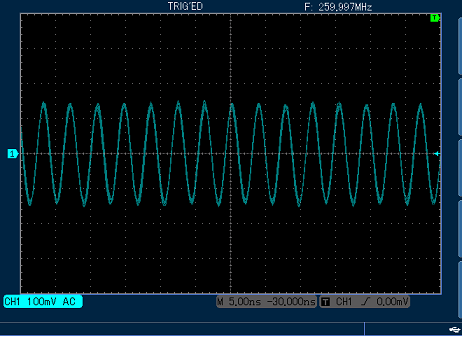 The Lecher line oscillator produces a clean sinewave.
Having now the facility for measuring frequency, the shorting bar was moved down the line to increase the operating frequency. However, the highest frequency which could be attained was 354Mhz. Beyond this setting oscillation did not cease as the bar was advanced but it apparently went into a half frequency mode. This is not understood because the author is not comfortable with the concept of sub-harmonics, but it demonstrates that the valve manufacturer knew his product and that oscillation beyond the specified 350MHz is unlikely.
Reluctantly it must be accepted that a 459MHz super-regenerative receiver based upon the 958A acorn valve was a pipe dream.

Many thanks for reading.

Thanks for being with us from time to time.