OPERATIONAL AMPLIFIERS (OP AMPS) are widely used in all fields of electronics including radio control systems. There are hundreds of different types manufactured ranging from less than 50p for the most common to a few £s for power types. The following Design circuits show several configurations that can produce interesting electronic projects. Many of the circuits shown could be applied in the field of radio control and possible applications are listed in the text of each circuit.

‘The hardened electronic drinkers’ of our readers will find these circuits most interesting and may well use them as the basis of a future DIY electronic project. The circuit designs are free to use and or reproduce.

THIS IS THE LEFT HAND PART OF THE CIRCUIT BELOW. THE COMPLETE CIRCUIT IS SPLIT FOR MORE CLEAR VIEWING.

The late Derek Olley of Fleet Radio Control used operational amplifiers to effect; making his analogue control facilities almost as comprehensive as those or modern digital systems. In Fleet XP-FM transmitters operational amplifiers are used to control servo sense and throw as well as control stick and trim responses.  They are also employed to mix controls.

Shown above is a typical control function.  Both stick and trim controls are 5kΩ potentiometers which, with rotation restricted to 900 about centre, will present the inputs to amplifier A2 with maximum excursions of approximately ±0.83V about +2.5V.  Amplifier A1 produces a + 2.5V reference which is employed for all control functions.  The non-inverting input to amplifier A2 is connected directly to this reference and the 47kΩ feedback resistor ensures that the inverting input is at a virtual 2.5V from which it will deviate only by fractions of mV in response to movement of the control stick and trim lever, due to the high open-loop gain of the amplifier.  The slider of the control stick potentiometer is connected to the inverting input of A2 via a 59kΩ resistor which, in conjunction with the feedback resistor defines a gain of -0.8 approximately and similarly the 330kΩ resistor from the slider of the trim potentiometer defines a gain of about -0.14 for this function. Also 2.5V from the ‘Lo’ position of the dual rate switch is connected to the inverting input of A2 via a 50kΩ variable resistor and a 3.3kΩ fixed resistor. This serves to diminish the effect of the control stick and trim levers by a pre-set degree when ‘Lo’ is selected. Thus the maximum output of A2 is 2.5V ± approximately 0.8V under the control of these functions.

The method for control of servo reversal and throw is ingenious. The output from A2 is connected via resistor networks to both inputs of amplifier A3. The connection to the inverting input defines a gain of -1 by virtue of a shunt feedback network with series and feedback resistors of equal value. Interestingly these resistors constitute series feedback with regard to the signal applied to the non-inverting input of A2, defining a gain of +2. (Note that the effect of these conflicting gains is additive rather than multiplicative because the input signal is common).

A2 output is also connected indirectly to the non-inverting input of A3 via the slider of the 50kΩ sense and throw control potentiometer, connected between A2 output and +2.5V, and a fixed 33kΩ buffering resistor.

When the slider of this potentiometer is in the central position, as shown in the schematic, only half of the A2 output is applied to the non-inverting input of A3 and thus the effective gain of A3 to the common signal is: +1-1=0 and consequently there is no response to the controls. 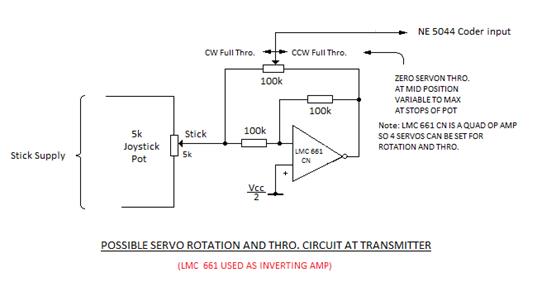 <<POSSIBLE CIRCUIT (by Terry Tippett) FOR VARIABLE SERVO REVERSE BASED ON THE LMC661CN IC. The single OP-AMP shown provides variable servo throw and servo reverse. Note that the IC contains four OP-AMPS so this single IC could offer independent variable servo reverse settings for all four primary joystick controls. The joystick pot provides the input voltage to the OP-AMP. The output voltage of the OP-AMP however moves exactly opposite to the input. i.e  If the joystick wiper in the diagram slides upwards (more positive), then the OP-AMP output will go downwards (more negative) by the same amount. The output voltage of the circuit is taken from the trimpot at the top of the schematic. With its wiper centre to left produces zero to full normal servo rotation. With the wiper position centre to right produces reversed servo rotation.

Measurement of small alternating voltages for display on a moving coil meter is subject to large errors due to rectification losses. Those who have AVO meters will be aware that a separate non 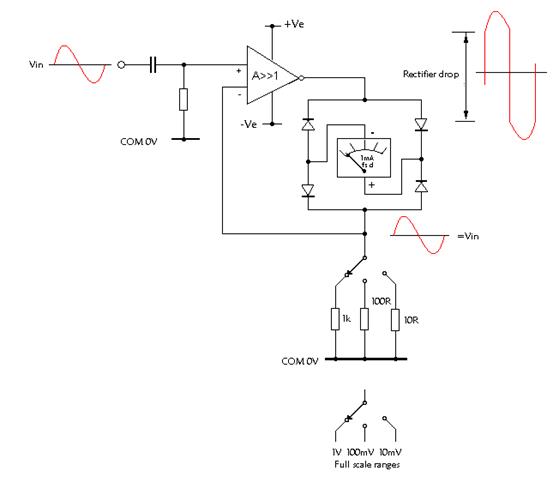 linear voltage scales are provided for the lower AC ranges. This non-linearity is necessary to accommodate rectification volt drop which is minimised for the AVO by the use of a copper oxide bridge rectifier and a transformer which steps up low voltages before rectification.

In the above circuit rectification loss is rendered insignificant by negative feedback; permitting very small voltages to be displayed on a ‘linear’ scale with a lower limit being defined by amplifier noise or un-nulled offset.

This circuit is essentially a voltage follower circuit with a meter and bridge rectifier interposed between the amplifier output terminal and the feedback point.

The input waveform is reconstituted after rectification because the high open-loop gain of the operational amplifier commands that the waveforms at its input terminals must be essentially identical. Thus the waveform at its output terminal must accommodate the distortion due rectification drop.

Waveforms for a sinusoidal input are shown at these points. The rectified average value for an input waveform is displayed by meter and the range resistors define the level which gives a full scale deflection of 1mA.

The approximate rms. value for a sinusoidal input may be displayed if the range resistor values are multiplied by 0.9 to accommodate the form factor.

Measuring small AC voltages using diode rectification is always a problem as there simply is not a perfect diode.

This circuit compensates for the diode volt drop. 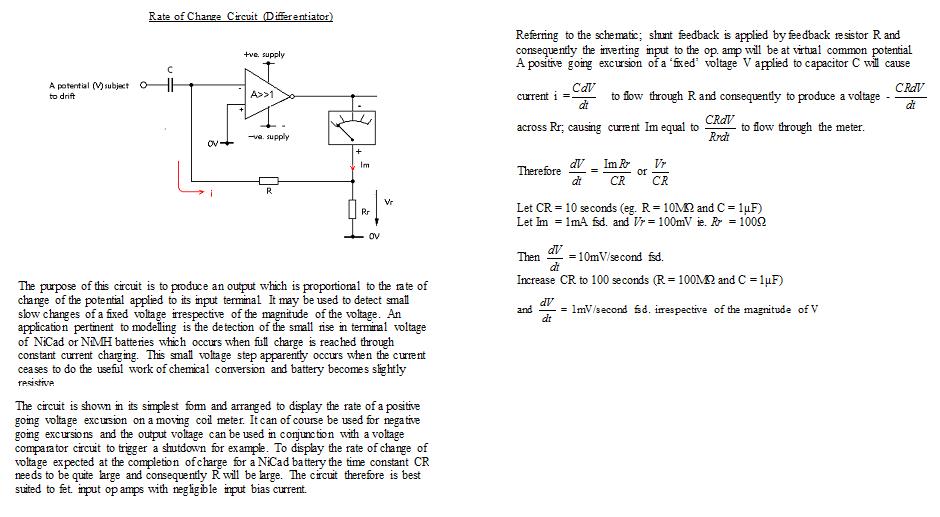 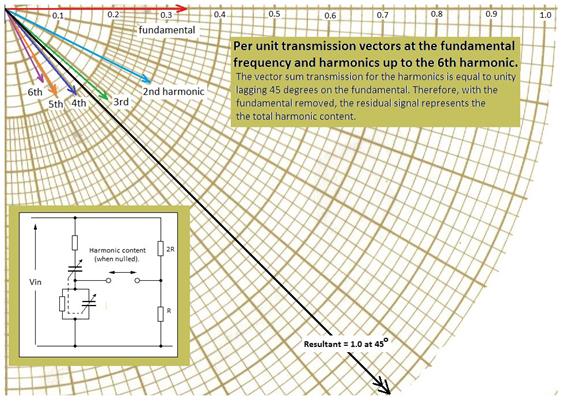 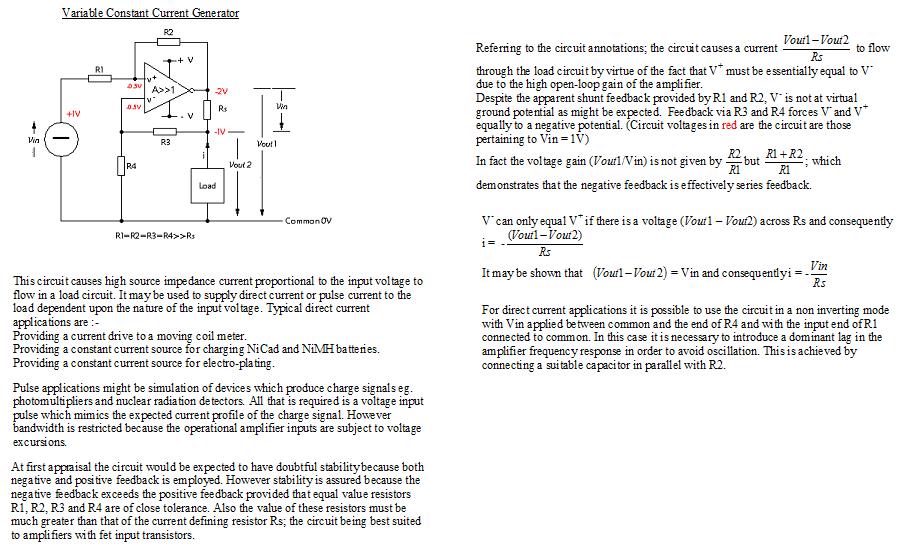 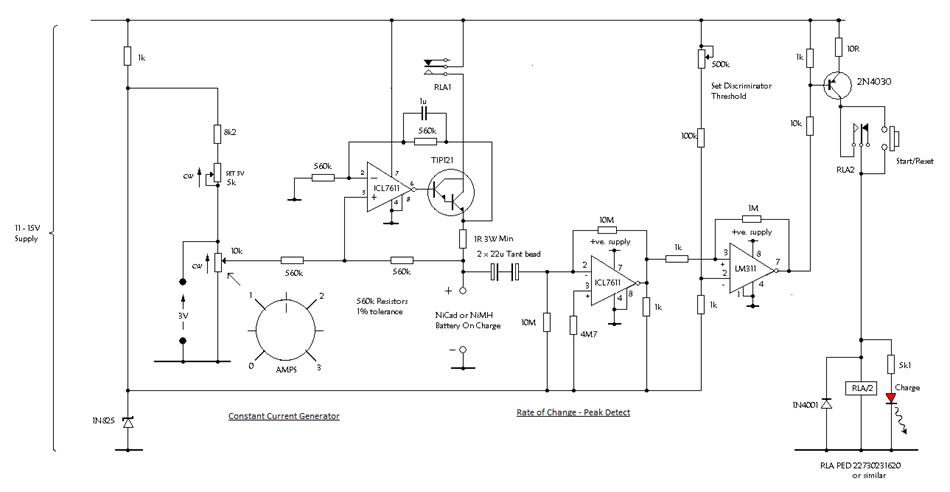 Note that this circuit is offered as a possible starter application. Some component values may need adjustment. The intention is for the 270 degree pot to set the constant charge current of the battery from zero to a maximum of three amps. 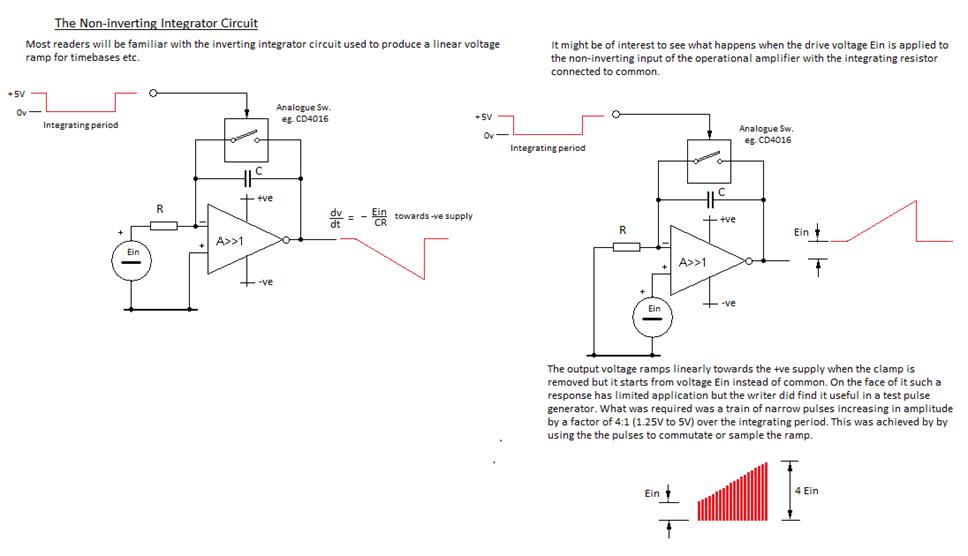 A NON-INVERTING APPLICATION OF THE INTEGRATOR CIRCUIT ∆

The schematic to the left shows a typical OP-AMP integrator.    The RH schematic shows an interesting non-inverting variation of the circuitOne possible application could be the drive circuit for the audible output of an alarm system. Soft start to ear-piercing noise. Repeated ouch! !

PLEASE NOTE your computer may block one or more of the above schematics. If so click The IE security bar