NOTES10 of the Norcim website are still dedicated to the technical input of David Caudrey. Page 9 was getting a little on the ‘long side’ so some of this initial input has been brought over from page9 with more original stuff added lower down in the page. All interesting stuff for all of us electronic nuts!

The schematic results from the reverse engineering of the charge control circuit for the 18V nicad. battery for a Spear & Jackson Drill purely for the sake of curiosity. The method of charging appears to be timed constant voltage charging rather than the constant current charging usually applied to nicads. Darlington transistor Q1 can undoubtedly act as a constant current source but only at a current well beyond the continuous current capability of the power source. An led. flashing about once a second indicates that charging is in progress and this can only occur if transistor P1 is turned on by the volt-drop across R1 due to the passage of charging current.  The value of R1 indicates a charging current of about 100mA is required to enable operation of the led. The led. is switched on and off by transistor N1 which is itself driven by an approximately 1Hz oscillator which embodies components R3, C1 and R4 in conjunction with ad. hoc. logic elements within the CD4541  integrated circuit.  With the count control inputs A and B both at logic ‘1’, the counter is programmed to stop after 216 cycles of the oscillator when the state of the Q output changes from ‘1’ to ‘0’, causing transistor Q1 to switch off, terminating the charge. Thus a maximum charging period of about 18 hours is defined. 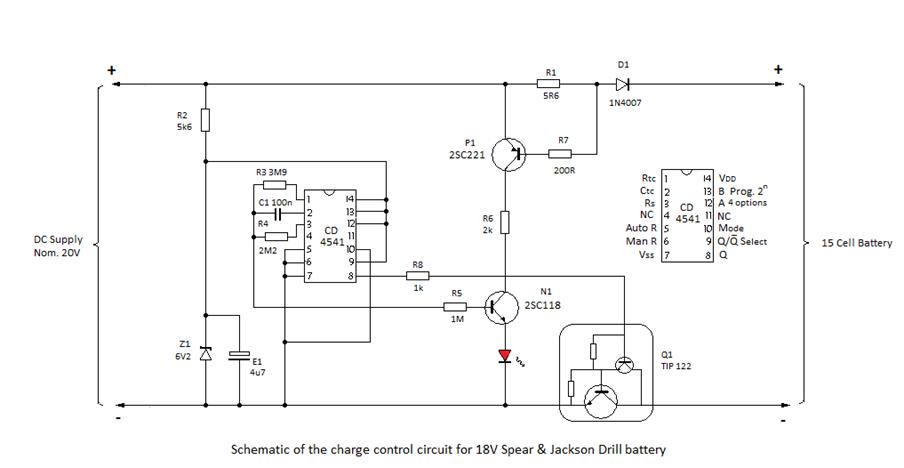 The attached with regard to charging LiPos might be of interest.

I treat LiPos as I would lead acid batteries ie. tapered charge with current limit.

In order to get the maximum output from LiPos, the final voltage needs to be precisely 4.21 volts per cell. With these conditions one can connect and forget but, as my charging supply has a time switch, I like to have some means of preventing discharge if the mains go off. The charging circuit attached  is based upon the uA723 regulator because it employs a very stable reference of about 7V. (one can of course use one of the three terminal regulators but they are less suited).

As can be seen, the circuit embodies a diode to prevent heavy discharge but, because of its volt drop, it needs to be within the feedback loop; leaving the sample network to slowly discharge the battery if the mains supply is removed.

Wouldn't it be nice if one could have a diode which drops zero volts outside of the loop? Reasoning that MOSFETs have no threshold voltage I came up with the circuit for a 'zero drop diode' which does just that.

TESTING OF BRUSHED AND BRUSHLESS MOTORS 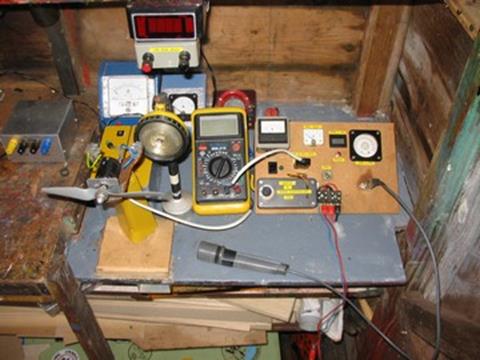 current, etc with different propeller sizes and motor makes. The interesting bit here is not so much the results of the motors used in the testing but the ingenious circuitry developed by David to accurately give the readings of all the parameters involved. Garden Solar lights give the reader a source of CdS cells for the optical sensor (ORP12). The sensor is used simultaneously for the analogue and digital tachos. With regard to the test bench, it can of course be used to test brushed motors 'raw' but with the appropriate speed controllers it may be used for both brushed and brushless motors. The rig is not working at present because I am trying various methods for measuring  thrust but when it is working I will try to send some results of tests on both types. With regard to thrust measurements, they only have value if the prop diameter is at least 50% greater than the pitch because otherwise they run stalled when stationary. I found this out when I tried to test with the little 5 x 5 inch props used with rtf. foamies. On the bench they give virtually no thrust  at all but manifestly they work very well in the air. I'm not sure that I can add much to the circuit descriptions. As I mentioned the test rig wasn't designed, it just sort of happened.

The LM392 is useful for such applications because it contains an amplifier plus a comparator. Thus the signals from the photocell are converted into rail to rail square pulses and thus are of fixed amplitude for application to the ratemeter circuits. Note that the ORP12 will now have several replacements. These are now widely used in garden center Solar Lights. (See typical circuit below)

With respect to the linear ratemeter circuit:- The ratemeter or frequency to voltage circuit is a development of the ubiquitous diode pump, using transistors in lieu of diodes in order to linearise the output and to enable the circuit to respond to narrow pulses.The diode in the bias chain compensates for the effects of temperature on Vbe for the transistors.

USING THE SPECIAL SHUNT IN THE MOTOR WIRING ∆ see details of the shunt construction below.

Having no meter capable of measuring  50Amps or more a shunt was constructed from first principles as depicted below. The shunt resistance is 4milliOhms so a 200mV full scale reading equates to 50A ie the reading is divided by four.

No claims are made for accuracy (which, inter alia, is dependent upon the accuracy of construction) but an indication of 20A corresponded with that for the only trustworthy current meter available for which 20A is full scale. As a point of interest the 10A range for low to medium priced digital multimeters was found to be inaccurate as  indications varied markedly for series connected examples. Great accuracy is not expected because the shunt appears to be a loop of copper wire soldered to the printed circuit board and it is doubtful whether the 10A range is ever calibrated.

However indications of the voltage of a Weston Standard Cell for the 2V fsd. ranges of  3 Draper DMMs., costing only £14, were accurate to three decimal places. ie. 1.018V.

All transistors and diodes are low frequency silicon type. The CdS is of particular interest. It is used in the OPTICAL SENSOR circuit above (ORP12). 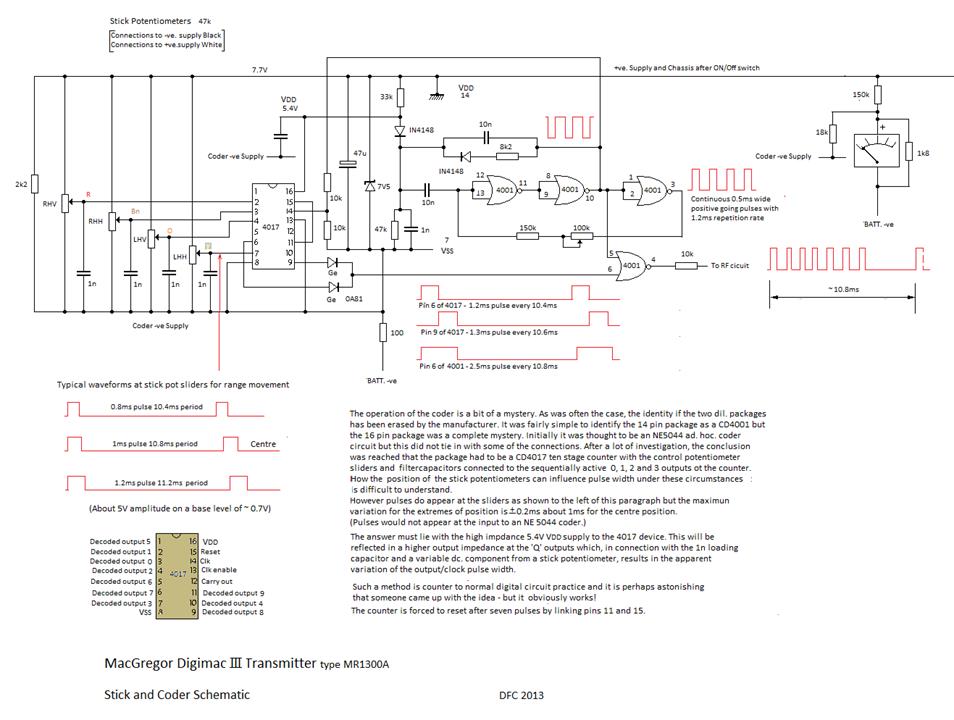 A particularly fast frame rate for this Coder, almost doubling servo update information compared with other systems. One slight drawback maybe that only MacGregor servos could be used. The use of the common low cost 4017 IC made it commercially attractive. As the joystick control pots work with their wipers set to one end of the track, servo reverse at the Tx was not possible. 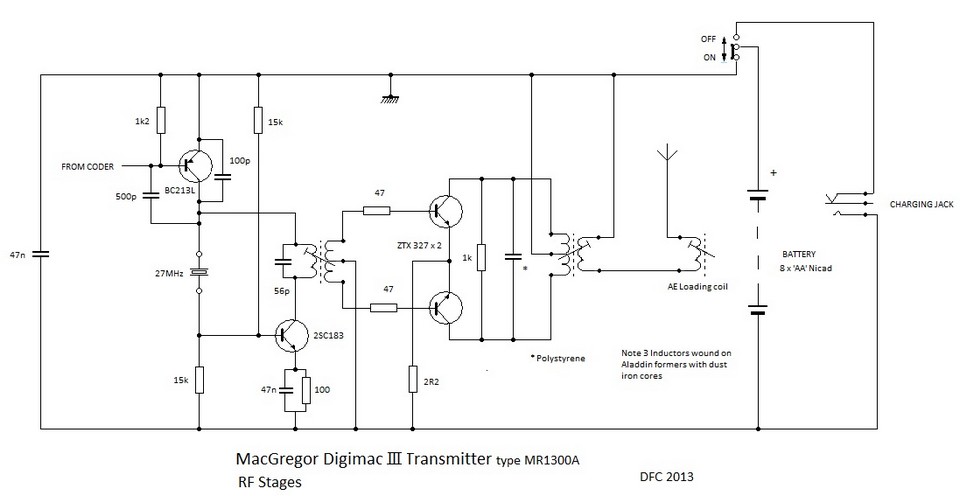 THE 27MHz TRANSMIT SECTION OF THE ABOVE CIRCUIT. ∆

This was an AM (amplitude modulation) design. The 2SC183 Xtal oscillator Appears to be collector tuned to sub harmonic half frequency of the Xtal. i.e. 13.5 MHz. the following ZTX327 transistors pulse on…in turn…with each cycle, effectively doubling the frequency back to 27 MHz. the following RF coil impedance matches to the telescopic aerial.

The use of two output transistors running at a lower frequency and sharing the RF power was actually quite clever. The BC213L switches ‘off’ the supply voltage to the oscillator via the coder pulses, transmitting the servo position data. The capacitors around the BC213L slow the rise and fall time of the coder pulses to reduce sideband interference. Careful design of this stage in an AM transmitter can produce operation of systems just 10KHz apart.

THE MACGEGOR MR1300A RECEIVER CIRCUIT FOLLOWS NEXT note that this is split into two sections for more clear viewing on small screens. 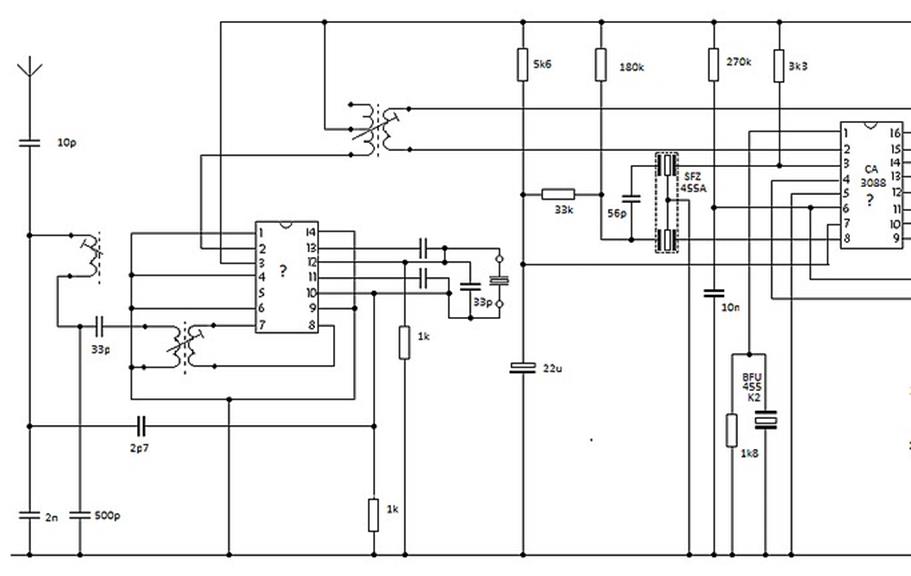 THE FIRST I.C. (UNIDENTIFIED) PERFORMS MIXING OF THE 27MHZ RECEIVED SIGNAL WITH THE 26.545 PLUG-IN XTAL. THE 455KHZ PRODUCT IS SELECTED BY THE CA3088 AND CERAMIC FILTERS. 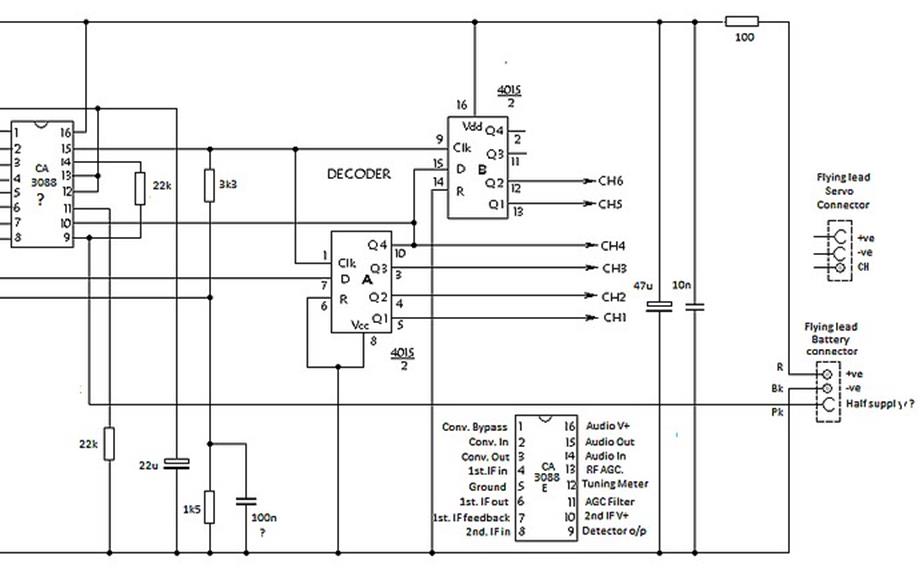 THE USE OF THE CENTRE TAP BATTERY SUPPLY TO PIN 9 OF THE CA3088 IS STRANGE.

ANY READER COMMENTS WOULD BE MOST WELCOME. 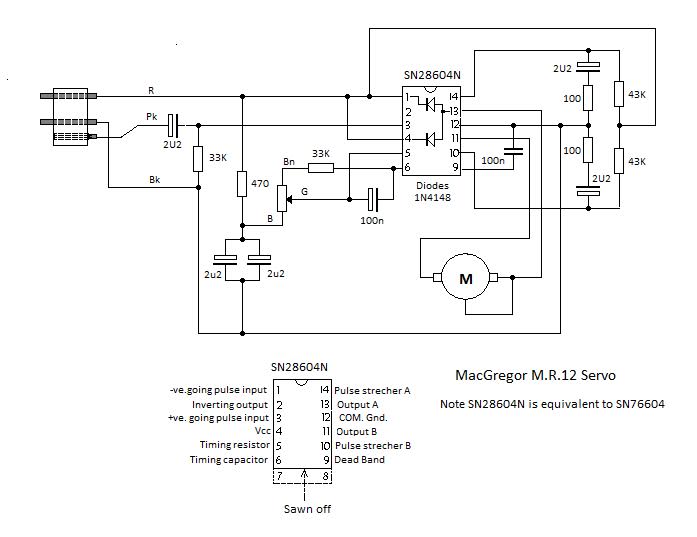 Not sure about the history of the SN28604N servo I.C. but it is interesting that the chip and two pins have been cut OFF ! (Yikes !)

Looking at pin 12 suggests that initially the SN28604 may have been intended for use with early ‘four wire’ servos. Pin 12 being connected direct via a forth wire to the centre tap of the 4.8 volt battery pack. Note that six components have been used to provide a 2.4 volt reference for pin 12, making the use of a forth wire unnecessary. The change from ‘four wire servos’ to three wire type happened around 1970.

Only one other manufacturer to my knowledge that chopped the end of the I.C. was Micron when they used the NE544 chip. The smaller 16mm diameter Mitsumi servo motor was being imported from Japan in quantity and all UK R/C manufacturing re-tooled their servo mechanics to suit this motor. It was noted that (with the NE544) one side of the I.C. (pins 1 to7) used all input and timing components.

The other side of the I.C. simply gave output to the motor. It made sense to have the I.C. across the servo to feed the motor direct on the tiny PCB. Unfortunately the I.C. was too long for the width of these new servos at 19mm. So Micron kits cut the end off the NE544 to make it fit ! Pins 7 and 8 were simply not needed providing the circuit component values were altered as per those in the kit and assembly drawing. Perhaps this was the thinking behind the MacGregor M.R. 12 servo design. 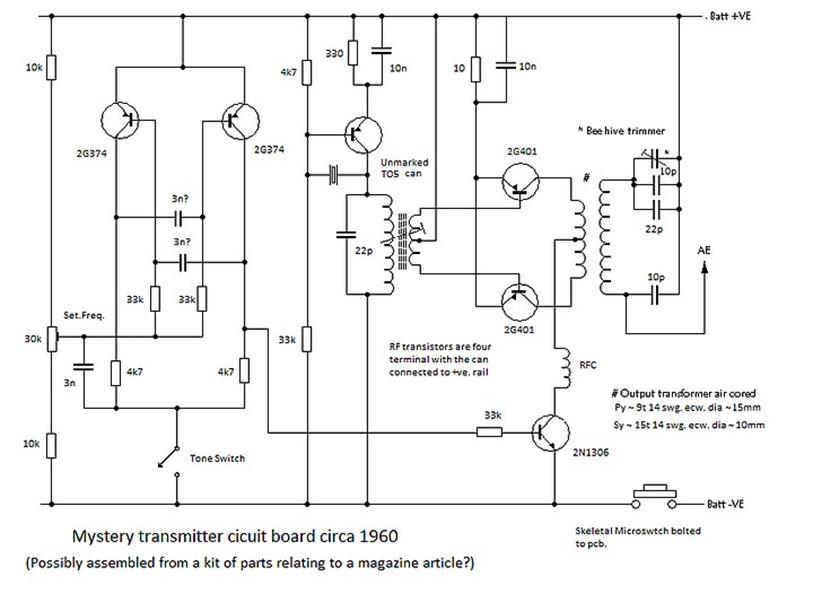 The left multivibrator circuit produces an adjustable tone from 2kHz to 4kHz (approximately) this suggests that the matching receiver possibly used a tone filter of around 3kHz. The crystal oscillator appears to run at half frequency (13.5MHz), kicking each of the output transistors ‘on’ in turn. This effectively doubles the frequency to 27Mhz. The aerial is coupled via a single Pi filter to suppress harmonic content.

The use of two output transistors running at half frequency and sharing the RF power was actually quite clever as they would produce more gain than trying to run them at the higher output frequency. Early transistor technology did struggle with frequencies as high as 27 MHz. (those days are now gone with transistors into the Gigahertz range!).

Click for some further notes re the Mystery Transmitter from David C.