These notes about ‘Spread Spectrum Technology’, ‘Frequency Hopping’ and the use of the ‘2.4 Gig band’ for model radio control are intended for newcomers. They introduce the most exciting innovation for radio control in the last decade.

Frequency bands allotted for model control are usually wide enough to fit in around thirty crystal controlled channels. Each channel with its plug-in crystals can control a model without radio interference to any of the other 29 frequency channels. This method has been used from the mid sixties and has, and still is, a superb well developed and proven system for model control. HOWEVER accidental switching on of a transmitter on the same frequency at your flying site can be catastrophic for the model in the air at that time. 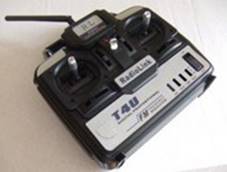 Radio Control equipment using the 2.4 Gig (gigahertz) band however, ‘share’ this radio band in a very different way. They use all the frequency channels in a quick random type scatter, This ‘spreads’ the transmission of each system over the whole of the 2.4 Gigahertz radio band. ANYBODY CAN SWITCH THEIR TRANSMITTER ON AT ANY TIME WITHOUT INTERFERING WITH ANY OTHER USERS MODEL.

Each transmitter spends so little of its time on any single frequency channel, that virtually zero interference is produced to any of the other systems.

As a result of this continual ‘frequency hopping’ of the whole (or part) of 2.4 Gig radio band, many R/C systems can be used alongside each other without co-interference. All the systems simply ‘SHARE’ the same 2.4 Gig radio band.

The 2.4 Gig radio band is the largest radio band that R/C modellers can use (it has the equivalent of up to 80 channels!) but there are other commercial users of the band. In practice (based on recent years) 2.4 Gig model radio control has proven to be interference free from other users, Partly perhaps because other commercial users are outside the range of your club site.

Manufactured frequency hopping receivers have no idea what transmitter they are going to end up with! And they

The number of Frequency Hopping (Spread Spectrum) systems that can work together is quoted by different manufacturers from 20 systems to ‘over 200 systems’ (Graupner HoTT system). Both of these figures are in excess of a ‘safe’ number of model aircraft in the sky simultaneously down at your local club. Perhaps the lower figure of 20 could equal a model boat club activity on a very exciting Summer, day!

2.4 gigahertz receivers have a very short aerial, just 3 centimetres at the end of a short 5/7cm coax flex. The effective 3cm bit is best outside the model if possible. In a boat, the 3cm end bit must be above the water level. 2.4 Gig is virtually ‘line of site’ contact between your Transmitter and the Reciever aerial. Thought has to be given to metal type objects that get in the way of this, i.e. batteries, motors, helicopter metal parts and carbon fibre. Longer coax replacement aerial flexes are available but intended for replacement of transmitter aerials. If applied to receivers the longer coax covering unfortunately produces less range owing to coax signal loss. Model boat application probably OK but aircraft, some serious thought needed.

The signal intensity from the short (around 12 cm) transmitter aerial forms a doughnut shape around the aerial axis. The least signal strength (range) is pointing the aerial at the model. The 45 degree (click) angle would seem to be the most practical optimum for aircraft water and land models. (Note that David Caudrey’s findings using his sensitive OD 2.4Gig Wave Checker, completely contradicts the above. See Page 22).

Spread spectrum (frequency hopping) systems ‘share’ the 2.4Gig radio band. This results in a small loss of range as the number of users at the model site increases. A particularly active hobby exhibition venue where 2.4 Gig systems are used extensively for aircraft, boats and land models simultaneously, may well find some range reduction. Particularly with aircraft which use the greatest range.

So what are just the practical advantages of using ‘Spread Spectrum’ ‘Frequency Hopping’ ‘2.4 Gig Radio’ for model control?

No more expensive box of plug-in crystals to change frequency! (around £10 a pair, 15$ US)

No more long cumbersome transmitter aerial to bend/break or poke someone’s eye out!

No need to check who is on what frequency!

No need to display a frequency flag!

No need to get a frequency peg from transmitter control!

No need to worry about testing the model controls and motor, just switch on and test!

No need to worry about ‘metal to metal’ or electric motor interference, 2.4 Gig is immune!

20 or more models can be controlled at one venue!

A 2.4 Gig transmitter and receiver ‘Combo’ can cost as little as £26.00! simply, use all your existing batteries and servos. See Page7.

This ‘Practical Advantage’ list could still be added to!

Thank you for reading and do please come back soon!