FURTHER NOTES REGARDING THE ‘MYSTERY TRANSMITTER’ ...

Rummaging through my ‘junk’ the other day, I unearthed the ‘mystery’ circuit assembly shown above and wondered whether it could be made to work. On investigati 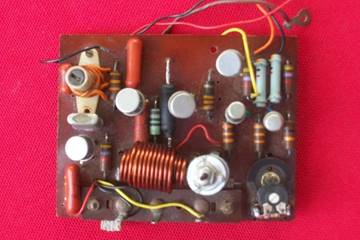 on the soldered joints and printed tracks were found to be so corroded  as to make components appear to be open circuit but, after some vigorous scrubbing with a glass fibre pencil and resoldering, all of the components were found to be sound with the exception of the skeleton pot which determines the frequency of the modulating tone. This was rectified by soldering on another pot after cutting the track of the original one as shown

The tagged strip at the bottom of the picture is part of a skeleton micro switch used to key carrier or tone modulated carrier. The crystal frequency is 28.600 Mhz. which tends to support a suggestion from Barry Lennox in New Zealand that the transmitter was of German manufacture.

The use of Texas Instrument transistors throughout with 2Gxxx identities, suggests that they were made in the Bedford UK factory. The identity of the local oscillator transistor next to the coil former with the dust iron slug has been obliterated as was often the case with early commercial semiconductor circuits; the 2G401 push-pull power output transistors are however clearly marked. As will be covered in due course, the output is remarkably high, considering the that the Ft for the 2G401 transistor is only 40MHz. Once the circuit was found to be functional the opportunity was taken to record some waveforms with a digital oscilloscope:

The output from the tone modulator multivibrator circuit, shown, is as expected for a circuit running from a 9V supply. The frequency of the tone can be varied over the range 2kHz. To 4kHz.

Similarly, the output from the crystal oscillator, shown left, is an undistorted sine wave as expected.

However, the waveform recorded for the output at the aerial connection, shown right, appears to be horrendous and must cover a very wide frequency range.

Suspicious of a tendency for digital scopes to show what isn’t there for complex waveforms, attention was given to the output power with the possibility of looking at the output waveform with an a analogue scope.

Unloaded the circuit was found to draw only 2mA from the 9V supply and loading the output with 39 ohms to simulate a quarter wave ground plane aerial, caused the current to increase to around 250mA – a dc. input power of 2.25 Watts. The estimated rf. output power is around 0.5W because a ¼ W 39ohm  resistor promptly burned out and 1/2W one became too hot to touch.

Returning to the dirty waveform, an analogue scope was used to look at the unloaded output producing the trace shown left.

Careful observation of this trace demonstrates that the inter pulse r.f and spikes shown in the digital trace are in fact present.

The following trace right, for the circuit loaded by 39 Ohm is even further corrupted.

Observations to date are complete DC 2020.