Terry Tippett is the web Author of the Norcim website.

Below is an outline of my life before becoming an Old Git.!

My early working life evolved to Swinden Laboratories Rotherham UK. This was a Research and Development lab for United Steel Co UK. I worked from a drawing office involved with the design and development of special purpose electro/mechanical machines for continuous casting steel plants. Life at this place was something else! We all had free ‘top class’ meals at lunch time with a free glass of good UK beer! The labs were set in a very large rural garden area with crown green bowls and tennis courts. These facilities were available for free during lunch time and late evening. Working late with design projects in the labs was no problem.

In my spare time I designed and marketed the first UK dual pulse proportional radio control kit system for model aircraft called ‘Gallatrol’ in 1961. The name was inspired by David Boddington who was editor of an R/C magazine at that time! Around two hundred units were sold.

A change of career and a year at Eaton Hall Teaching College eventually found me teaching Design Technology in a Nottingham school. 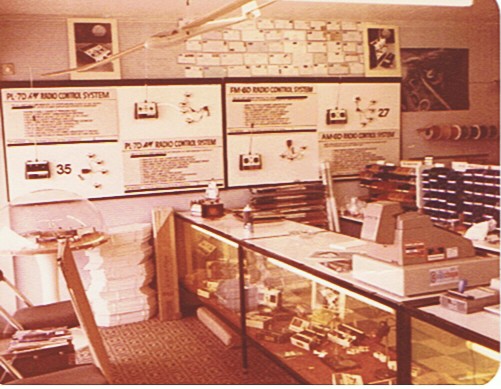 Within a few short years of teaching, the part time interest of model control had grown and sales of our new radio control system called Micron was showing a full time potential. I left teaching, took on a small office/shop unit and together with my wife Ada, began selling Micron Radio Control systems by direct mail order.

Many thousands of kits sold to countries around the world via direct mail order. Micron eventually employed around twelve people for almost a decade. The picture to the right shows the counter sales area of the kit assembly space. The floor above was the office for telephone sales, a component store and a service/development area. Although the primary sales were electronic Kits, some pre-assembled versions were also available.

Most of the sales were mail order with cheque or telephone orders with credit card. You can see just some of the thousands of Airmail order envelopes on the upper wall. Over counter sales were also available. Saturdays in particular were often so busy that the shop became similar to a fast food outlet with many of the kits being made up as the orders were placed at the counter. 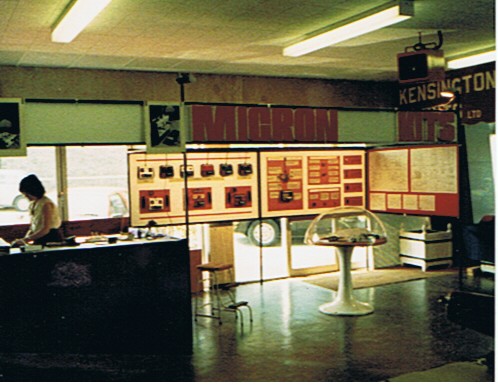 We attended the annual Model Exhibitions at Sandown Park in London, often joining in the flying displays.

The next picture shows the dexion tube assembled stand with selling and display area before the show opened to the public.

The picture shows the six versions of the Micron transmitter together with the four receivers and choice of servos. Early days offered a choice of AM and FM systems. 27, 35, and 40MHz bands were used. My dear wife Ada, is shown taking the money! Ada was responsible for the day to day running of the business while I skived off ‘test flying’.

Later happy years involved ‘supply teaching’ for Derbyshire UK secondary schools, not only for ‘Technology Support’ but also for some wonderful kids with educational needs.

I retired 2001 after the sale of the registered ‘Micron’ company and copyrighted drawings, designs, use of special tooling, stock and electronic equipment.

My lifetime interest in Radio Control Electronics and model airplanes has never been lost!……it has just been changed a little with age!

I am now in my eightieth year and a Prostate Cancer Survivor of over thirteen years! Detected with a Gleason score of seven (aggressive). Laparoscopic Radical Prostatectomy advised and done within a few weeks. No post-operative pain and out of hospital in three days. The future is looking good with simple PSA (prostate specific antigen) checks for secondary tumours still showing extremely low levels! PSA checks go on at six monthly intervals for five years at which time if the level of PSA has not risen significantly, then it is considered that the cancer has been cured. Around 36,000 men a year in the UK alone are diagnosed with prostate cancer. Around ten thousand (one in three) will die from the cancer each year. Only lung cancer in men claims more deaths. There are at the present time, a quarter of a million men in the UK being treated for Prostate cancer.  Often referred to as the silent killer, prostate cancer can have few symptoms at the beginning and can go undetected for some time. A PSA blood check for men after the age of fifty is available simply by asking the GP. PSA checks can be unreliable but at the moment the only test available. Yearly follow up PSAs will show if the PSA is rising more than normal. It is hoped that a screening test based on a urine sample will be available in the not too distant future. My story involves absolutely no prostate problem symptoms and a perfectly normal PSA level of 4 point 2. (for my age at the time) A completely unrelated severe leg pain triggered a series of tests, one of which was a prostate biopsy which found the cancer. (almost by accident my GP points out!). There are side effects with ‘nerve sparing radical prostatectomy’ which with time, can be accepted and improve.