Many apologies for the sporadic layout of this page as it is being assembled from archive documents and copies that have been sent in from the Micron model users of yesterday.

Micron was one of the first UK radio control providers to use ‘Frequency Modulation’ on the 27MHz band. The problem of compatibility working alongside AM systems of the time prompted use of ‘Automatic Gain Control’ in the circuitry. This unconventional approach worked well providing no interference from the AM transmitters of the time. When the 35MHz model control band was first introduced in the UK in 1980 there was a mixture of AM equipment and FM equipment imported. Although the Micron receiver worked well in its 35MHz form, most other FM receivers did not tolerate the mix. The distinct advantage for Micron was very short-lived however as 35MHz AM systems were quickly banned, leading to a FM only 35MHz radio control band. The 27MHz FM version was kitted in two versions. A standard version without the 455KHz filter ( a capacitor was fitted in its place) which complied with the 50Khz spacing of AM systems of the time. A Professional version was also offered which included an expensive 10Khz Murata filter giving 10KHz channel spacing capability complying with the new 35MHz band.

David Caudrey has reverse engineered a vintage sample of the unique hybrid Micron FM receiver sent to us by Mr Bob Everitt (Thanks Bob!). The following circuitry shows how Micron used existing well tried circuitry together with a TAA661 FM chip. 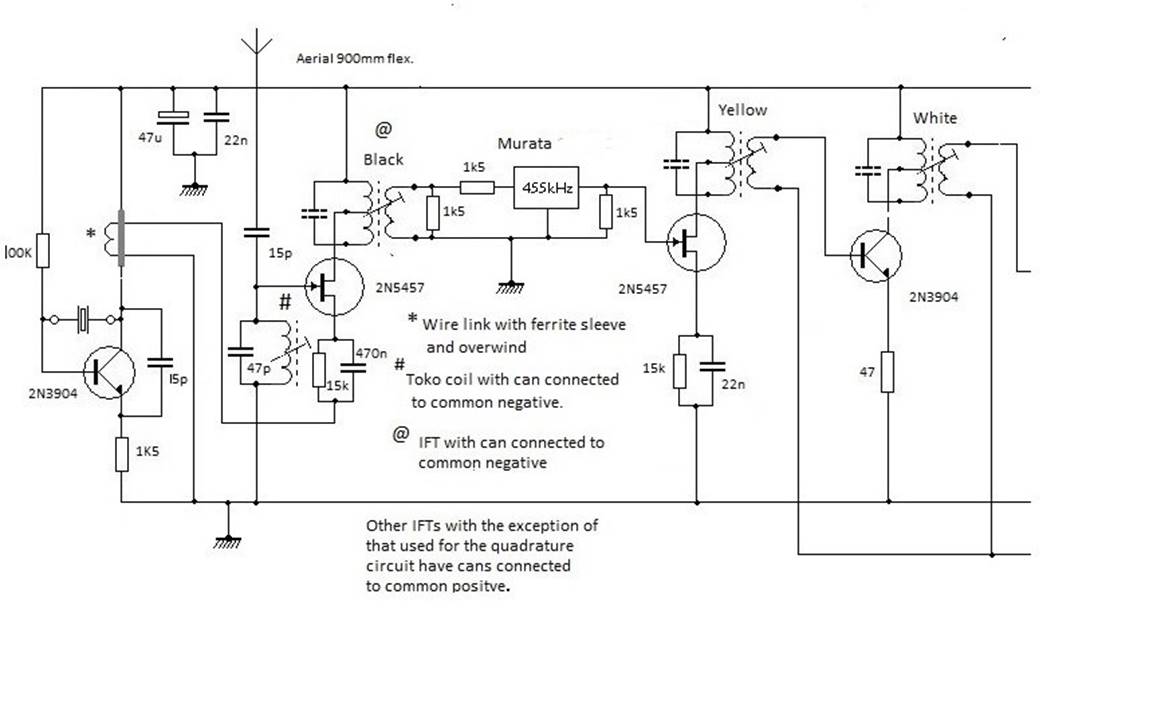 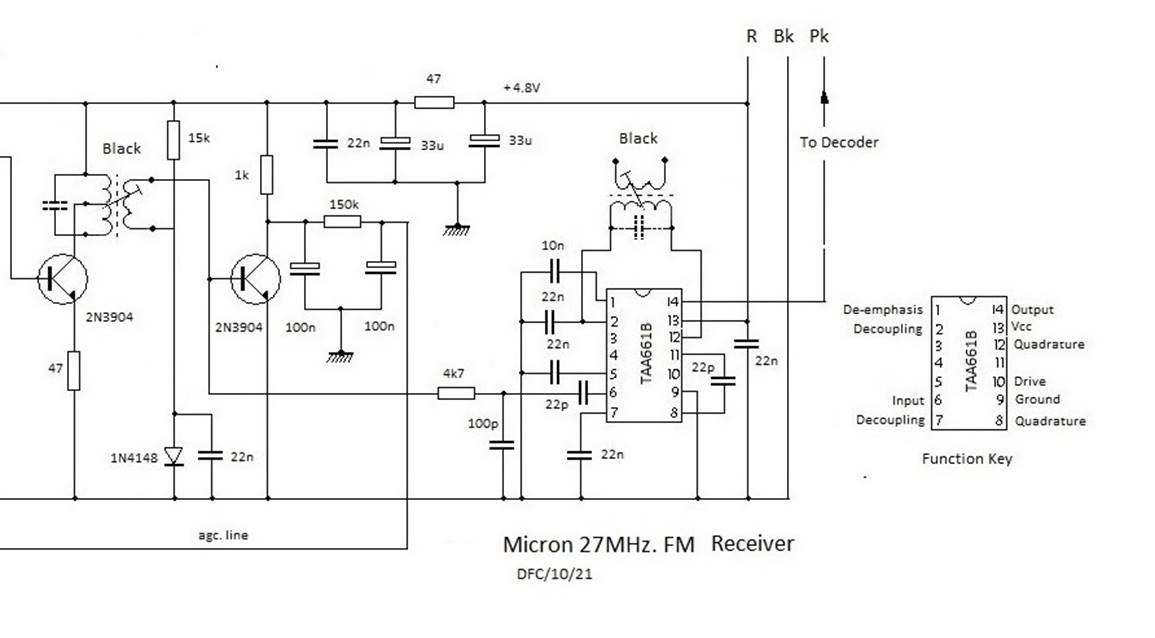 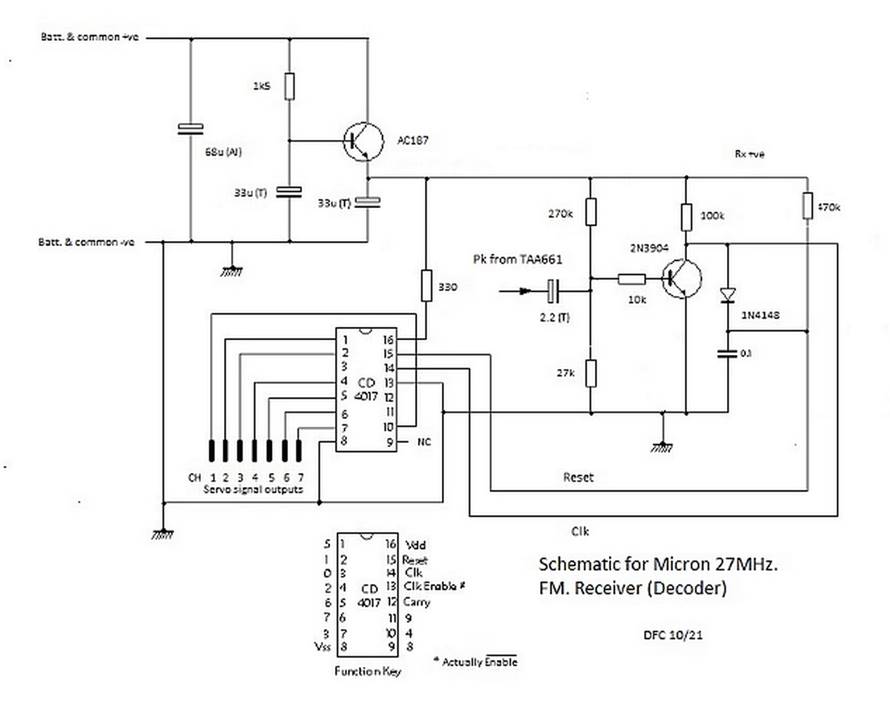 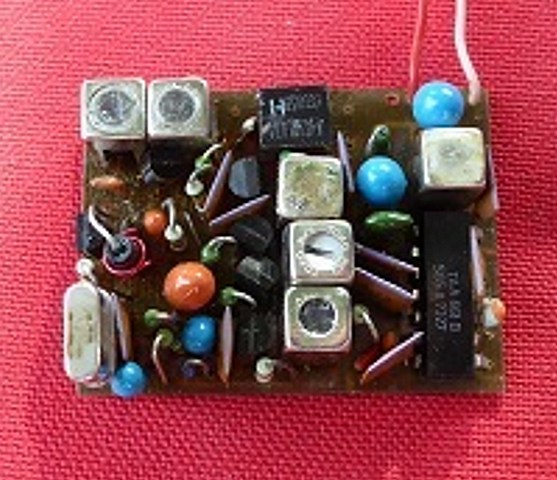 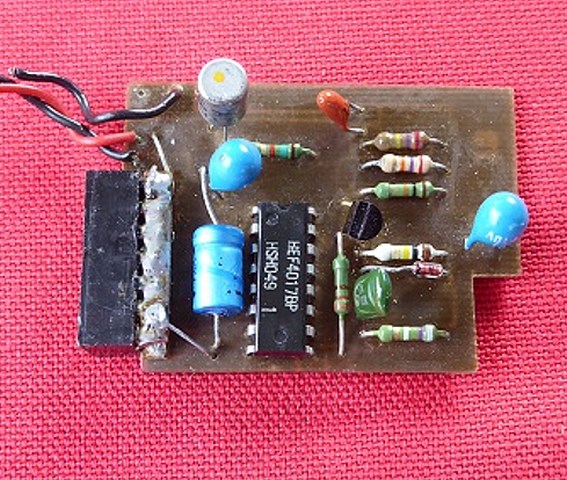 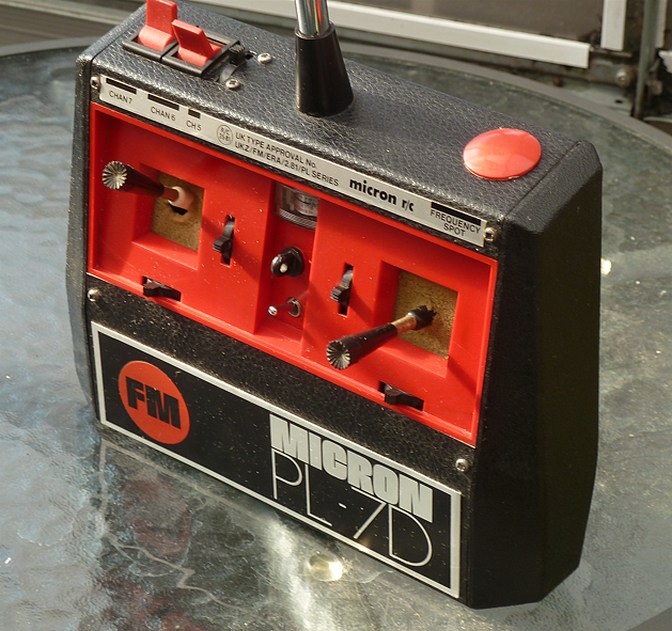 This Micron 27MHz FM transmitter of the late 1970’s gave much thought of how UK model aircraft could be controlled on the new 35Mhz band of that time.

Both AM systems and FM systems on 35Mhz were imported of good quality, only to find that the new FM type systems could not work alongside the older AM systems.

(Except the 35MHz FM hybrid Micron receiver which had no problems working alongside the new AM transmitters).

At that time I looked at the new 35MHz AM transmitters imported to the UK on a spectrum analyser and found that the channel spacing was of exceptional quality, And well within the 10KHz required. (The picture is of Bob Everitt’s transmitter which he home-built in 1978 from a kit).

The problem was that the later breed of FM receivers using chips of the day were not capable of tolerating a close by AM transmitter of equivalent quality.

The powers that be decided that the easiest way out of this dilemma was to Ban the use of AM 35MHz transmitters in the UK.

A sad decision for the development of the new 35 MHz band at that time as it resulted in complete chaos. UK manufactures and even imported FM manufacturers all made their own special plug-in crystals which didn’t work with any other Radio Control System.! A total disaster for the new UK dedicated radio control band.

Had quality AM 35MHz systems been allowed to survive, then all manufacturers would have used standard ‘third overtone’ plug-in crystals, The combined quantities of standard crystals for all manufactures, would have produced a very significant reduction in price of changing frequency spot.

OK, I know, it’s one of those ‘In Hindsight Moments’ but worth a thought or two. Perhaps?.

The following picture is of a 35MHz FM transmit section component layout. It is a ‘fixed frequency’ type, meaning that only the special manufacturers plug in crystals were used. The board could be home assembled without having to be factory set to the correct FM frequency settings. All frequency settings were fixed and determined by the plug-in crystal.

The circuit for this RF section is shown on page 3 of this website. 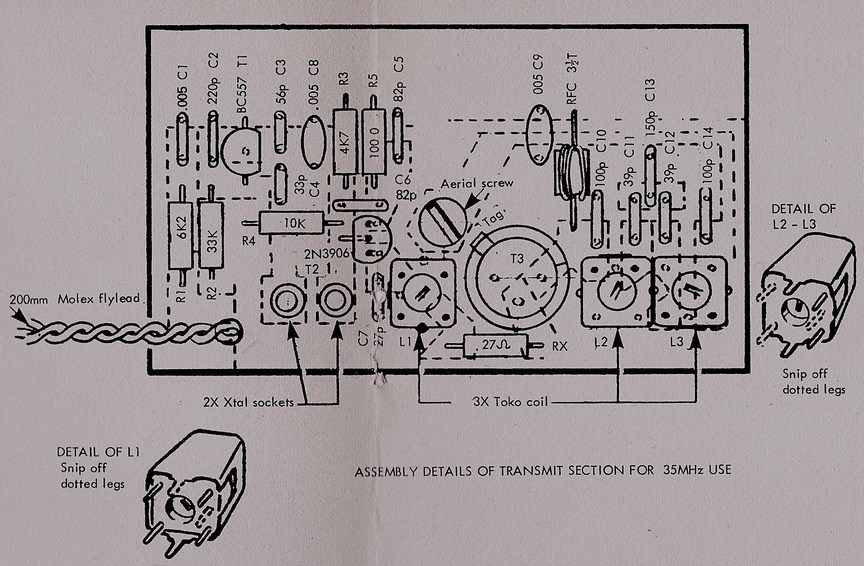 The following photo shows the copper side of the Printed Circuit Board of the 35MHz transmit section. 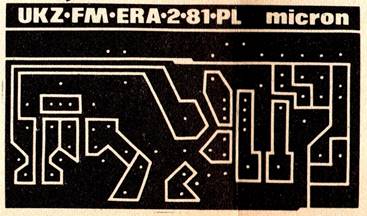 The width of the copper (left to right of the print above) is 70 millimetres.

Another Change of subject, 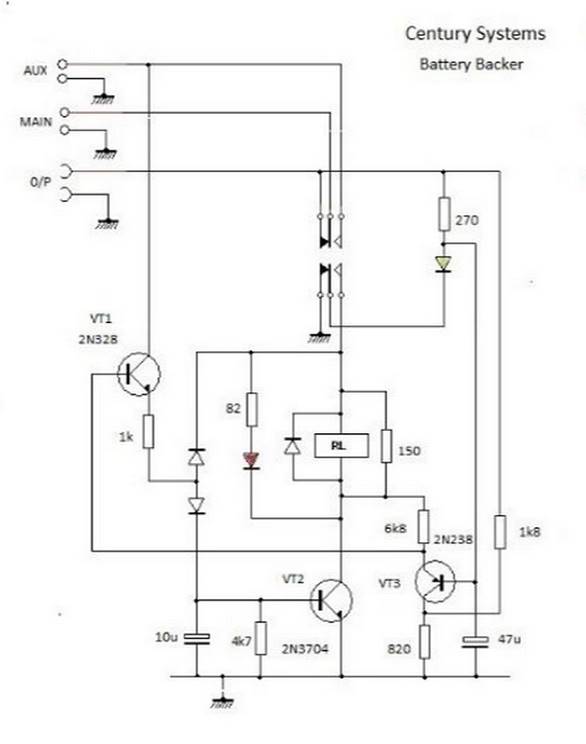 During the 1980’s a company called ‘Century Systems’ arrived supplying a host of model electronic kits. One of these kits was a ‘Battery Backup’ kit for use in the model aircraft. The idea was to provide a second battery that could automatically be electronically switched into use if the main battery failed, either with too much flight time or perhaps failure of a single cell 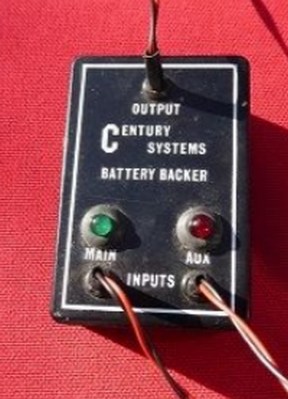 in the nicad pack.

The reserve battery could be quite small, capable of just one or two flights. So if a check was made before the next flight to see which battery is being used, you could keep that flight, the last, and short, if the reserve battery was being used. The small battery would not add much weight to the model. On a good flying day, One would have four or five power flights of about ten minutes so it would have been good in those days (forty years ago!) to have the Battery Backup device.

At that time Century Systems were ahead of things to come for model systems.

These days, drone transmitters begin a loud bleep when the drone battery has just a few minutes of flight time left. Technology has moved on.

MORE NOW ON THE INTRODUCTION AND DEMISE OF THE 35 MHz MODEL FLYING BAND INTO THE UK. 1980.

During the 1970’s in the UK there were several electronic kit manufacturers of radio control equipment including transmitters, receivers and servos. Lots 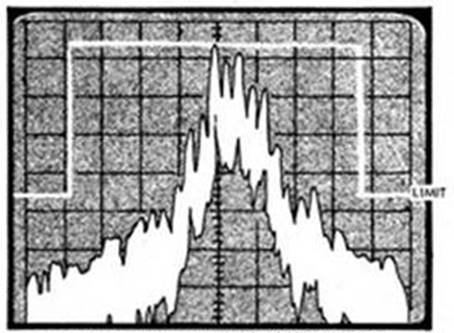 At the end of 1970, the UK BMFA had negotiated acceptance of a new ‘Model Flying’ radio control band on 35 MHz with Ofcom. This basically was to get away from the 27 MHz band as it was shared with an ever increasing use of Citizen Band radio by truckers and enthusiasts and there was a safety problem.

The 35 MHz radio control band had been working in the EU for a couple of years at this time without problems so a similar set-up was implemented here in the UK. All the UK manufactures of the time and Kit manufacturers had to have sample testing using an outside Testing Facility to show that their transmitters could safely be used on the new narrow band frequency spots just 10KHz apart.

Many UK manufacturers used the ERA (Electrical Research Association) in Leatherhead Surry to test their products. They tested the transmitter samples producing a report which included a Spectrum Analyser shot and details of radiated RF output. The photo shows the output of the Micron home build kit transmitter with the 10 KHz spacing ( like the photo of Bob Everitt’s PL-7D transmitter above). The output was clearly well within each 10 KHz frequency spot. Zero interference to both next door frequency spots.

Unfortunately at organized Model Flying Events, the organisers got the jitters about home built Radio (perfectly understandable) and they often tried to allow the frequency spot each side of the home built transmitter to be Free. The thinking was to ‘play safe’ for interference. This often could not achieved on busy days and the owner could not fly on that day. This thinking unfortunately filtered down to the many flying clubs, producing animosity about home made radio gear with club members.

This was the tip of the iceberg for the ‘Soldering Set’, of the seventies. The people that had built their own RC gear for almost a century. Home built gear became untrusted by the everyday club flyer. So along with low cost imports, the enjoyment of building your own RC gear came to its sad end . Also at this time several UK manufacturers of fully assembled RC equipment slowly died because of the low cost imports. There are now no UK manufacturers of model radio control equipment in the UK.

With the introduction of the shared 2.4 GHz band, the special 35 MHz model aircraft band has now become a relic of the past. All of the new 2.4 GHz model radio control gear and models are now simply imported.

During the late 1970’s, most radio control manufacturers used the Signetics NE5044 transmitter encoder chip. The chip was capable of generating up to seven pulse width servo channels using a lower component count of the traditional string of ‘half-shot’ circuitry. A typical 7 channel circuit using the NE5044 chip is shown below. 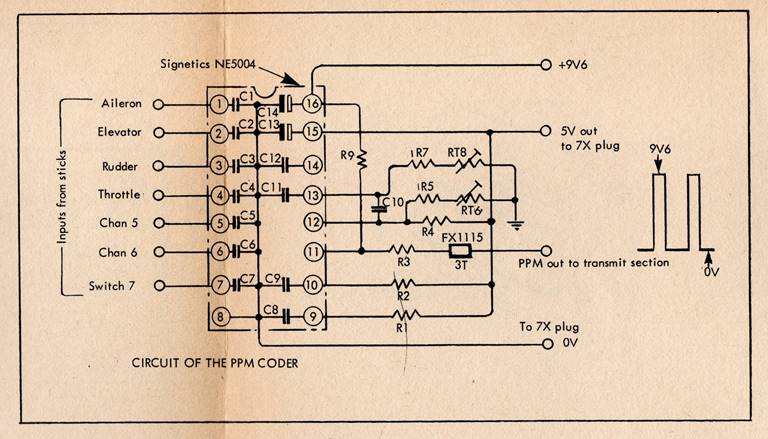 The circuit uses the ‘fixed frame’ option churning out up to seven servo pulses every 20 milliseconds.

To prevent interference from the strong RF of the transmitter (moving servos off centre position) with aerial extended, the PCB layout carefully covers the chip with copper from the PCB to alleviate this problem. 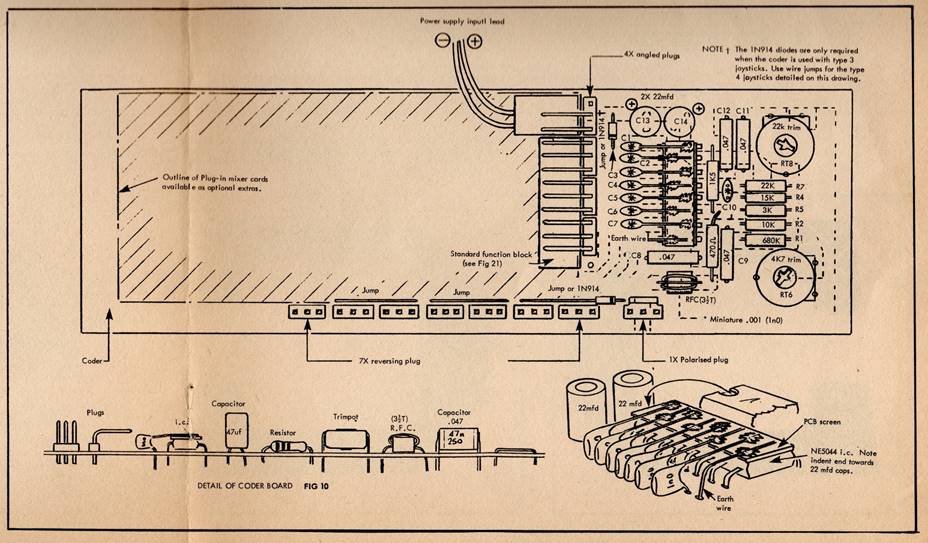 5044 coder board component layout showing the line of seven plugs at the bottom of the board.

The sockets for these plugs are from the control joystick potentiometers.

The angled plugs in the centre of the board are used for optional plug-in channel mixers.

This shows the copper side of the coder printed circuit board

The length of the board (left to right) is 14 centimetres. 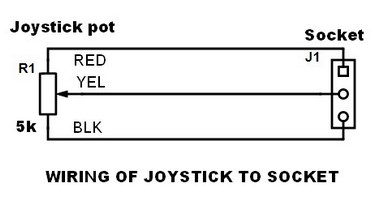 This drawing shows the wiring of each of the two potentiometers in a standard mechanical trim joystick used in Radio control transmitters. Reversing the socket, reverses the servo.

The wiring is twisted together. 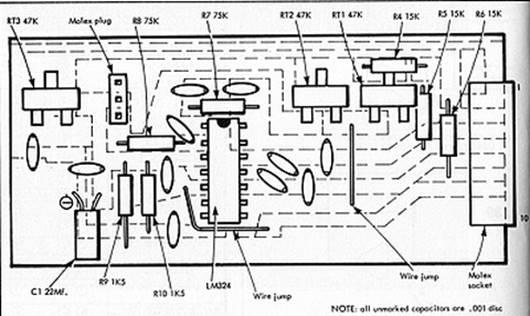 The circuit uses the popular quad Op-Amp LM324 along with trim pots which vary the mix required. The board mixes the first three channels for the different effects and should no mixing be required, normal operation can be returned to by rotating all the trim pots to one end. 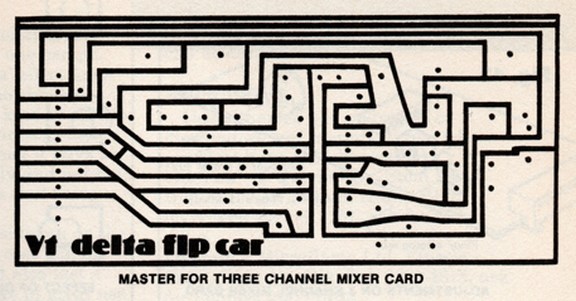 The copper side of the mixer board is shown larger than life. The length of the board (from left to right) is 8.5 centimetres.

BOB EVERITT SENT IN AN ORIGINAL DRAWING OF THE MICRON 27 MHZ FM RECEIVER (SHOWN BELOW) the drawings in those days, March 1978 were so big that this bit only just fitted our A4 scanner. However it shows how using the Murata filter in place of a capacitor produced 10KHz spacing on FM. (This input relates to the notes at the top of this page) 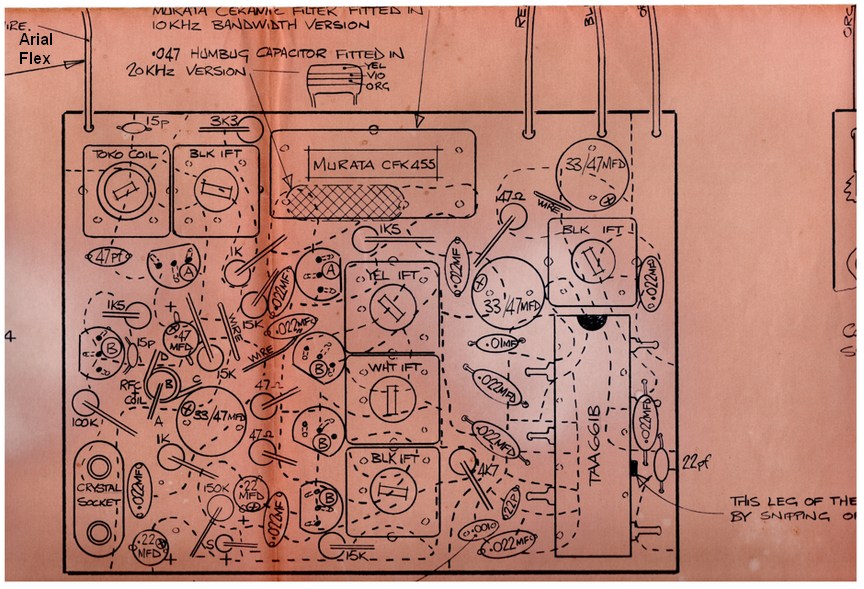 The transistor types used are

A MILD CHANGE OF SUBJECT, OVER TO THE MODELS THAT OUR ELECTRONICS USE ...

Mike Hausner sent us a mail about model flying of less than 250 grams flying weight.

Here in the US there is a small company that is making a series of 250 gram models.   He has 28 plus designs based on older models and also sells the RC gear needed to fly them.  They are all laser cut kits. 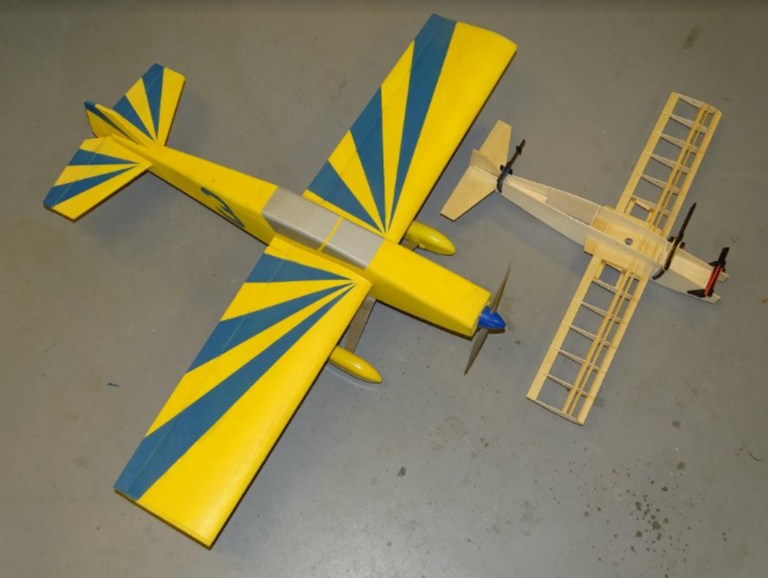 Mike designed an electric powered model called ‘Torpedo’ which was published by the Model Aviation Magazine plans service. Recently Mike has done a Mini-Torpedo that conforms to the ‘Less than 250 grams model flying class’. You can fly this mini version anywhere! There are no regulations involved. Just use your own thoughts of where and how safe is it to fly. It should easily be accepted as a ‘Park Flyer’ like a Kite. 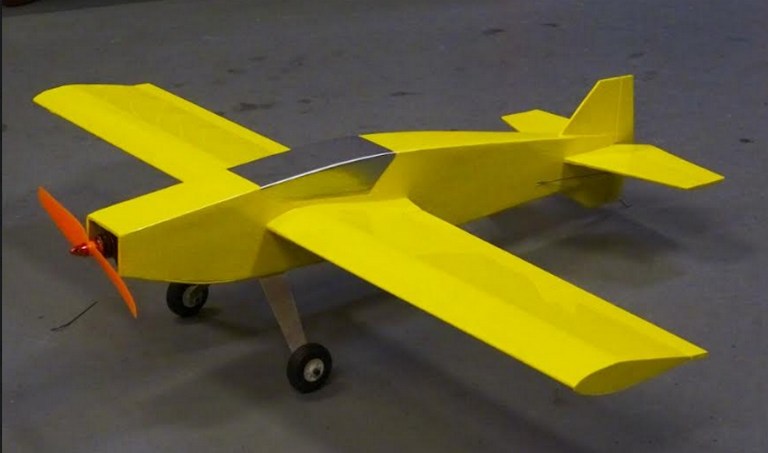 This is Mike’s pretty  Torpedo 250 which certainly looks the part. I have yet to get the dimensions of the mini-version but that fuselage side area should allow side flying without too much problem. 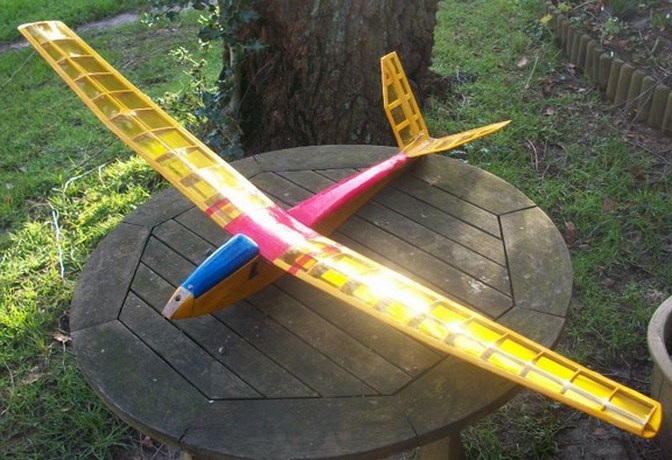 Another Sub 250 Grams model is covered in detail on page 33 of our website.

David Caudrey’s design called Vega is covered in detail on page 33 of this website.