This Flame Wheel F550 drone kit started life as a development project in the Porsche Motor Group. Brian completed the assembly of the drone but the project was dropped before use. All parts involved including the radio gear were written off the books and Brian was left with project parts. I suggested some sort of coverage of the Hexacopter on the norcim club site. 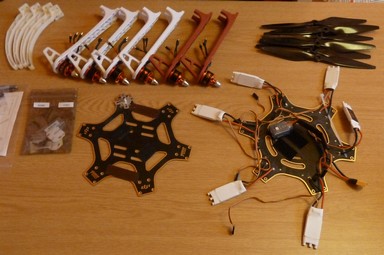 Unfortunately the virtually finished project had to be taken apart in order to package and send via Post to us. However this did provide the opportunity of several pictures during re-assembly. The picture to the left shows the pre-assembled parts as arrived. The six brushless motors on the arms can be clearly seen. Also the six white 30amp speed controllers already wired to the main circuit board. 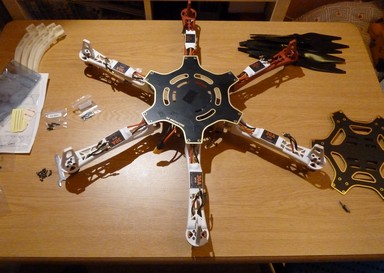 The next picture shows the assembly of the arms to the bottom plate of the main body. This plate is a printed circuit distribution board for receiver, six speed controllers and NAZA flight controller.

I was tempted to use Lock Tight thread adhesive on the 12 Allen screws but as the thread during tightening was very frictional I chose against this. The flight motors vibration hopefully would not be like an IC motor! Note the landing feet under each motor. These provide sufficient clearance if a camera is not fitted. Additional clearance for camera use is provided by four extension legs (see later).

Turning the assembly over, shows the receiver and NAZA unit completely wired and secured with Velco to the bottom frame. This picture shows the top frame being fitted to secure complete stability of all six of the motorized arms. Again at the back of my mind, I did not use thread lock adhesive as it is not possible to make any unforeseen adjustments to the receiver or NAZA flight controller plug socket arrangement unless this top frame could be easily removed. The battery input plug can be seen on the right hand side. It’s the yellow socket XT60 type. The three cell Lipo battery supplies power for everything and lies on top of that top frame using just two Velcro pads. 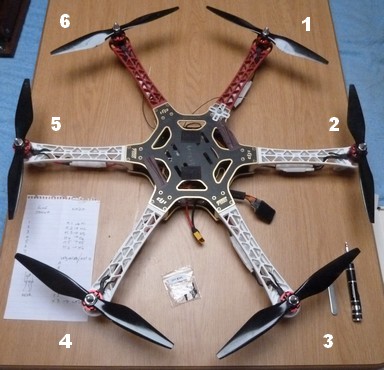 The picture to the right now shows the motor props installed. The two red arms are the front of the machine i.e. that is forward flight. The props are easy to fix as they have flats on the inside diameter to match up with the motor shaft. Unlike a glow motor it is not necessary to tighten the spinner nut heavily. In fact as motor drive shaft and prop retaining spinner are both aluminium, care should be taken.

The three cell LiPo battery (supplied) is for the larger diameter props 10x3.8inch. (there are different size props if using a four cell LiPo pack 8x4.5inch). The prop packs come as 4 x clockwise and 4 x anticlockwise. This gives two spare blades for whatever! It is important that the correct props are fitted to each arm with the correct rotation and lift. Getting the motor rotation sorted was a start. Plugging in the battery and applying very little throttle produced slow operation of all motors without props). By swapping any two motor input bullet connectors, the required rotation of all motors can be altered. The correct rotation for each motor (looking from the top) is…..

Now looking at the props, there are half of them in the pack that are twisted one way and half the other way. Remembering that all of the props must go in a direction to produce lift, simply select one for each motor rotation. There will be two left over. (If these are identical, then start worrying!). 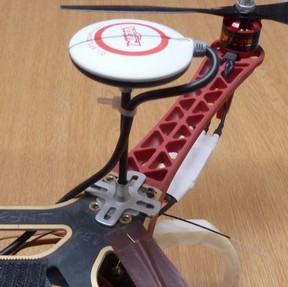 The picture directly to the right shows the GPS compass antenna which is plugged into the NAZA flight controller unit. (it is possible to do this with the top frame already fastened). 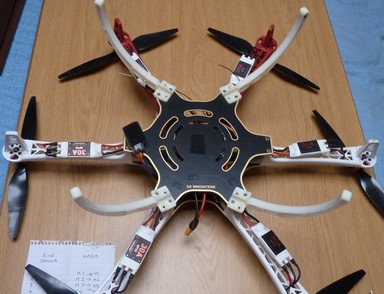 Four simple undercarriage legs come with the kit. These allow sufficient room under the drone to fit a camera. There also appears to be aftermarket versions which may be worth looking at. I felt that during 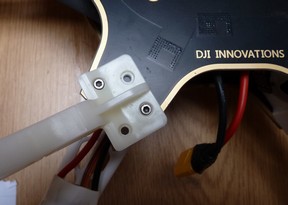 fitting these legs, that the screws could have been longer. Think that a heavy landing may just pull the screws out of the threads. There are metal (brass?) inserts on all screwed joints, very mechanically sound. Although the legs have four mounting holes, only two are used. 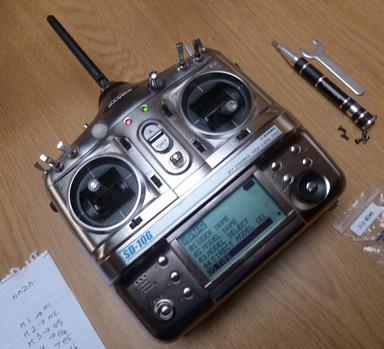 Brian’s transmitter for the whole project was the Sanwa SD-10G FHSS-3. 2.4 Gigahertz 10 channel with matching receiver

The overall design and construction of the Flame Wheel F550 hexacopter is extremely professional compared with the multitude of Toy Drones that are available on the high street. To give a typical example see the following picture of my Aldi toy quadcopter for comparison. 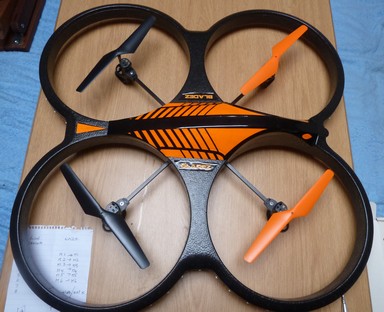 The Aldi Toy Drone is similar in size but its basic construction is expanded polystyrene. Very light. Simple brushed electric motors and electronics that keep the drone stable. The drone is so light that only a tiny rechargeable Lipo is necessary. Inexpensive! 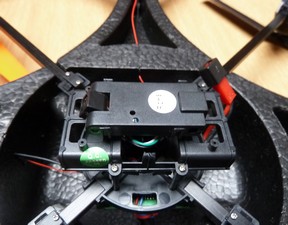 A tiny video camera is also built in to the package. It can be operated from the included controller to record either still pictures or video as it is up there in the sky. The camera is shown on the underside with its tilting lens. An SD card records the activity. Picture quality is not bad. The following link shows a typical flight video.

The camera is fixed to the drone frame so shows all the flight angles to counter the strong breeze that was blowing at the time. This does not however detract from the fact that the video is simply taken from a flying camera.

NOTE…if you do look at the Video and notice motorway activity in the shot, the motorway is around 500 metres away. The Aldi drone has a built-in security feature that triggers a self-controlled rapid decent and landing if range exceeds 100 metres or battery volts are at a low level.

The Flame Wheel F550 is capable of carrying a professional video camera costing hundreds of GBPs along with sophisticated stabilisation electronics and auto GPS return to take off point technology.

It is the obvious choice for professional use.

The Flame Wheel F550 weighs 1,531 grams with battery. (no camera!) the Aldi Toy similar size quadcopter with battery is over four times lighter including its camera at 351 grams. The camera for the F550 would probably add around another 200 grams making the TOY drone five times lighter than a PROFESIONAL drone.

Although both designs are extremely innovative, the whole design approach to each is totally different. The markets of each are also massively different.

The TOY drones have a multi-million units market worldwide so have to be very simple, light constructed units, fully assembled along with a hand controller capable of just fitting batteries (supplied!) in order to go and fly. They must also be easy for packaging and distribution.

The Flame Wheel F550 is in a professional category which is a relatively smaller market. It will carry a video camera costing hundreds of GBP. Plus the ability to download live video content . Many other features such as auto GPS return to take off point and Altitude Set can be built in too.

The cost of a professional drone package including camera is estimated around ten times the equivalent TOY version. The results of the Flame Wheel F550 though are quite incredible. See the second link below.

With a slightly larger battery capacity, Stefan would have made it back without problem. Do read his pre-flight notes! A beautiful glimpse of something that most of us will never see in our lifetime.

And the future is Now! See……. https://www.youtube.com/watch?v=f1E9jtE1aAk