Apologies, the RSS feed from RC Universe is no longer available.

We recently ordered two XK A800 RC electric powered gliders with switchable in flight giro stabilization system. These were simply bought for some easy flying at our friendly farmer’s field. The following notes cover initial thoughts after receiving the models. 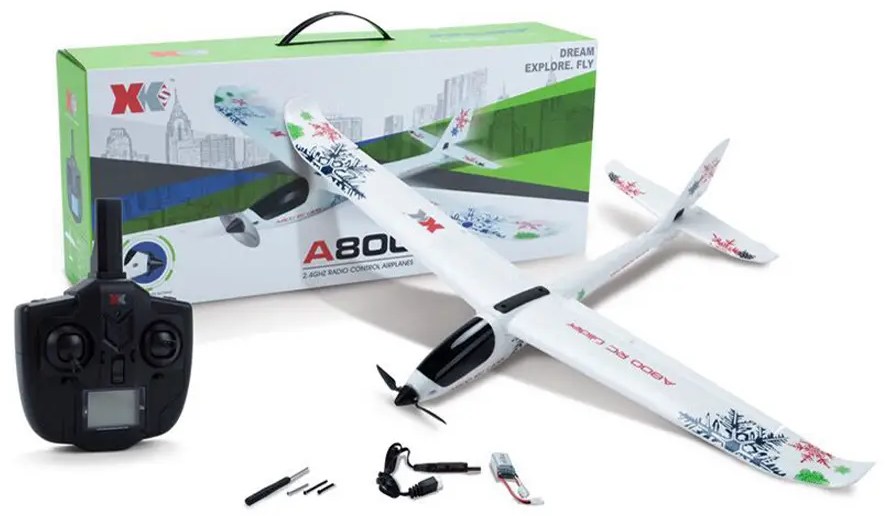 For the price of around £60.00 you get a complete package which is almost ready to fly.

The Package comes with a really nice 2.4GHz transmitter with an LCD display showing model control surfaces and selected trim settings. The joystick controls are very smooth with accurate centring. There is a comfortable feel to the transmitter shape.

The model comes with a receiver battery and a really small charger that plugs into any USB socket for power supply. The charger has two LED’s. A ‘red’ shows when the charger has power and a flashing ‘green’ shows charge taking place. When the battery is full, the flashing stops. A full charge takes around 45 minutes. 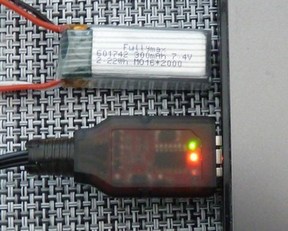 The picture (right) shows the USB charger plugged into a laptop for power supply. Also shown is the tiny battery that powers the four servos in the model including a speed controller and motor/prop unit and receiver stabilization system. Incredibly, flights of 15 minutes are available. The electronics that detect when the battery is fully charged can just about be seen through the semi transparent window.

As can be seen, the model is small, just 31 inch span but it does fly like a much larger machine probably because of the giro stabilization system.

The model itself comes in several parts for mailing. Using common sense and help from the instructions, the model can be assembled within a few minutes. Three machine screws and a screwdriver are provided to complete the model. Push rods need just clipping into the elevator and rudder middle holes of the ready fixed control horns. Two machine screws hold the wing. Two servo plugs need connecting as the wing is fitted. It does not matter which plug goes to which socket. 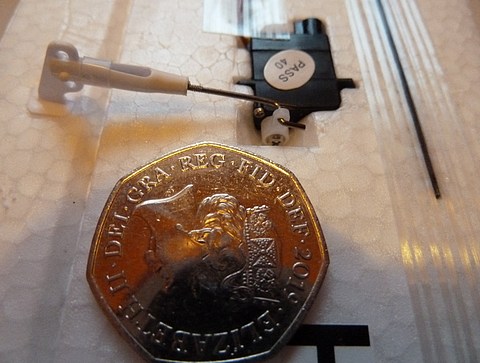 The picture shows one of the micro servos ready fitted under the bottom of each wing. (they have surprising power!) (note that the coin used for comparison is a UK 50p with a diameter of just over 1inch or 27.5mm).

Four micro servos come ready fitted along with the motor/folding prop and speed controller. The other surprising thing is the stabilization electronics which are built into the receiver. A solid state giro is used which detects the models attitude in the air and instantly corrects any wind gusts or even over control that the pilot may be giving from the transmitter. It is quite fascinating to hold the model with everything switched on, and watch the control surfaces as with one hand you put the model at various positions. All control surfaces move in a way to correct the model into a straight and level safe flight attitude. The transmitter controls do however over-ride this clever automatic flight control but only to a small extent. This allows mild safe control of the model from the pilot.

For the experienced radio control pilots, the right hand top button on the transmitter can be pressed, the transmitter makes two bleeps to confirm, also visually, the power LED on the front of the transmitter begins to flash, indicating direct control of the model from the transmitter. (in fact I have noticed that a very small amount of giro control still exists in this direct mode but the transmitter is definitely in charge!). In this mode, loops and rolls and tight 90 degree turns are possible for a seasoned flyer.

The very first flight was, well ‘interesting’. With full stabilization, the model almost launched itself from my hand. Absolutely no control from the transmitter needed. It flew perfectly stable at about six feet altitude towards perimeter trees. Up elevator needed and applied. But as the model pushed it’s nose up, the giro electronics kicked in producing a nose dive to correct the sudden climb! This ‘up-down’ persisted as the trees got nearer but we managed to clear them. Phew! ... Throttle was halved and the remainder of the flight was stress free, although turns used a fair bit of sky. Once positioned the landing approach and landing could not have been better. So slow and perfectly controlled. Requiring so little input from the transmitter. The clever electronics was doing it’s job.

Back home now and looking over the model I think I may have found a possible reason for the 737 type behaviour.

(1) The pre-flight adjustments in the instructions ask to check the position of the centre of gravity. ‘It should be between 55 to 65mm from the wings.’

Conclusion so far is that the C of G has been the main problem. It was too far back on the wing, around 60% back from the leading edge.

Only one further flight to date but the model was a lot more stable and easier to control. (Flying weather is not good here at the moment in the UK).

Any thoughts on this one from readers out there with many thanks! norcimguy@gmail.com

Andrew Newton’s video review of this model is worth a watch. It shows just how controllable the XK A800 can be in the hands of a seasoned flyer. I love landings which include Andrew actually catching the model before it lands! https://www.youtube.com/watch?v=ehQass5SNOY

CLICK THE MODEL ABOVE FOR THE SUPPLIER WE USED.