A page of electronic interest (but not all r/c related.!)

A blast from the past from Michael Robbins.  And his veteran PL-6D transmitter ...

Sent by email Michael informs us that he built this transmitter from an electronic kit when Noah was building his boat!

Michael is still using this transmitter to date in 2022 !

This version is probably now 47 years old and using amplitude modulation, i.e. switching the transmission off during brief sequential pulses to activate up to six proportional position servos after decoding at the receiver. Looking at the plug-in crystal with its yellow tag suggests that it is an early veteran radio control transmitter from ‘Micron Electronics Kits’ for the 27 MHz band in the UK.

The 27 MHz Frequency Band in the UK became very popular during the 1960’s with ‘Citizens Radio hobbyists’ and also Tuck Drivers method of keeping in touch with base and truckers around for traffic problems. At the same time, 27 MHz radio control systems were being tried for industrial applications.

It was at this time that it had become evident that the flying of large model aircraft posed a safety problem as many losses of control were being reported with some public damage. This was caused by interference from the increasing use of the 27 MHz radio band.

So early in the 1975’s, both the UK manufacturers along with the BMFA began to negotiate a more safe ‘Model Flying Frequency’ and one was given quickly. The 35 Mhz frequency  was allocated for ‘Model Aircraft Flying Only’ during the late 1970’s.

Germany had already seen the model R/C flying safety problem and had sorted a ‘Safe Model Aircraft Only Frequency’ of 35 MHz. They had used this frequency band without problems for two years so it was a no brainer that our UK followed suit by introducing the same 35 MHz  here in the UK in the mid/late 1970’s.

The  ‘Model Aircraft 35 MHz band’ is still safe now in 2022 for model aircraft, But unfortunately many used systems are now old and not capable of adapting to the 10 KHz frequency spots of the band.

For many technical reasons,  there now appears to be no manufacturers of 35 MHz model radio control 2020.

Apologies for the quality of this copy as it does appear to be very old.

The use of a 27 MHz super –regenerative front end suggests an early 1960ish design. As such it would use the whole of the 27 MHz band so could not be used along side other radio control systems using the same band.

So we could be looking at a 60 year old design.

Of particular interest is the graphic symbols used for the transistors in this schematic. They work well. A Google search for the history of these transistor symbols does not recognise them.

Two analogue proportional servos are shown with position feedback pots probably controlling rudder and elevator with a third non proportional output probably to control the throttle of a diesel or glow engine.

If anybody out there recognises this circuit and can put a name to it, please do get in touch.

Millions of them need special disposal after life.

25 different active components are used in this one plus an I.C.

The old filament lamp had just one active component.

The LED UX10 Base spotlight during reverse engineering

An Email from Adrian Hiley refers to Norcim page 9 circuit of the Skyleader transmitter coder circuit.

I've found your site of interest and made use of the Skyleader circuits
for converting an inherited Skyleader Courier II to 2.4GHz.

Refering to the encoder circuit on page 9 there are a couple of
differences that it might be worth noting on you site.

Firstly, the 'G' buddy modulation is not connected directly to B
modulation to RF board by via a 103k mylar capacitor.

Secondly, the Tx has 'electronic' sticks in that the trims are not
mechanical but via 10k sliders and a resistor network in parallel to the
5k pots. The resistor network differs between horizontal and vertical
pots for some reason!  I've attached a diagram and photo to illustrate. 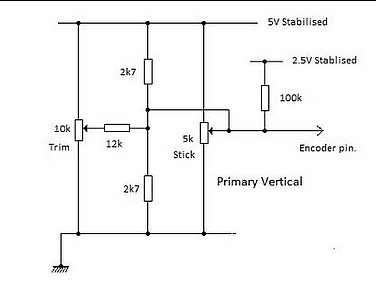 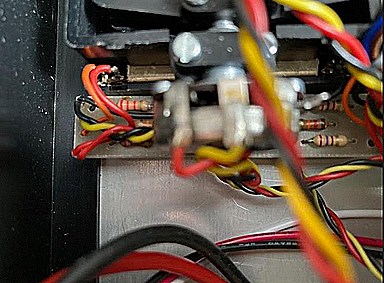 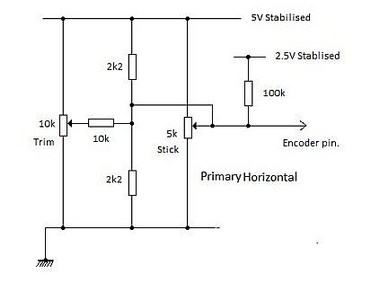 Many thanks Adrian. Above are your picture and David C has used your circuit outline to produce the two diagrams suitable for the Norcim ‘MS Word Webpage’ system.

Many of the UK manufacturers of the time of Skyleader in the UK used ‘home grown joy-sticks of the time (1970’s). Some of which incorporated mechanical in-flight Vertical and Horizontal trims. These types used small gear teeth to physically move the control pot bodies back or forward by around 5 degrees or so achieving a level flight condition. The Page 9 of this website shows the Skyleader circuitry using this type of joystick.

During the 1970’s there was a growing type of R/C joy-sticks that claimed to give more accurate centring. These units used a simplified mechanical construction without the gear driven in-flight trims. The in-flight trim adjustment was done electronically with separate, usually, slider type pots.

So the new non mechanical in flight trim super accurate centring joysticks became popular for manufacturers. Also to be honest, it was easy to incorporate a few small extra ‘cheap as chips’ electronic components (resistors) to give in-flight trim. Often linear trim pots were used which ‘looked better’ on the outside of the Transmitter front.

It is clear that Adrian’s transmitter version used the ‘Super Accurate’ centring joysticks of the day. The photo above shows the small printed circuit board and components that is required for each channel. 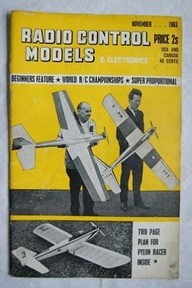 Now back to the mystery receiver circuit found by Michael Robbins (above).

We have had an Email from contributor Jean-Marie Piednoir  who has traced the original circuit to a construction article in a very early ‘Radio Control Models and Electronics’ magazine dated November 1963. The design was by Idris Frances who later went on to produce ‘Flight-Link’ radio control systems. Kits of electronic parts including printed circuit boards were also made available for the magazine article. This was the beginnings of true dual proportional control using analogue position feedback servos. Only pulse proportional and Galloping Ghost systems offered a type of proportional control at the time. Analogue Dual Proportional systems became popular for a time but there were difficulties when it became to adding more proportional channels as often movement of one servo would often slightly move another servo. Analogue proportional radio control systems were eventually replaced by Digital Proportional systems which offered the use of many more servos without problems.

There are still copies of the Radio Control Models and Electronics November 1963 magazine on EBay See picture.