How UK households have been conned into paying a billion pounds for ‘free’ light bulbs that don’t work!

The following notes about energy saving light bulbs, ‘CFLs' (compact fluorescent lamps) and energy conservation are written to provide food for thought only. They are personal thoughts which may well be questioned by those that know better. I hope they are. 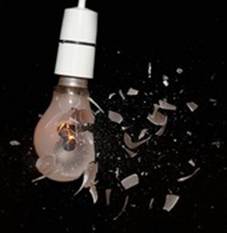 These notes question the energy saving effects of CFLs here in the UK and highlight the high cost of their enforced draconian bureaucratic implementation.

UK government endorsed schemes to promote the use of CFLs have sent out an estimated 262 million bulbs in the last two years to power suppliers customers. These were completely free of any charge including postage. The ‘street value’ based on a realistic retail cost per bulb of £2.00 gives a figure of 524 million pounds. Post and packaging costs are estimated at a further 175 million pounds (based on six bulbs being sent per customer at a p&p cost of £4.00). Supermarkets have also been used as drop off points for CFLs offering them as low as 10p each which is simply a give-away price but gives checkout info of who buys them and how many. (This method also avoids the p&p costs to individual customers) The total ‘street value’ of this great giveaway energy saving project is now approaching close to one billion pounds! Where does the money come from to fund these schemes? Well the power suppliers pass this cost on to their customers. It is included in the cost of your electricity and gas bills each month but not itemized.

‘’Which?, the consumer watchdog has calculated that each household has ended paying £45 each (over the last two years) through higher energy bills to fund the scheme, even though many consumers objected to being sent the bulbs. Many complained about having to go to the Post Office to collect what they thought was a parcel, only to find it was a bulb that did not even fit any of their lamps.’’ (ref. Telegraph.co.uk )

The CERT (carbon emission reduction target) scheme has now been running for around two and a half years. Using the consumer watchdog figure above for CFLs, and based on 25 million households in the UK, a figure of well over one billion pounds has been charged to householders so far to fund the scheme of ‘Free energy saving light bulbs’.

The unfortunate thing is that the energy saving effect of CFLs here in the UK has to be questioned.

All of the schemes to persuade the public to use CFLs, have not worked. People are still hunting for the old Edison 100 watt and 150 Watt type that give superior light. They are hoarding them for future use. The new CFLs are much dimmer. They are difficult to read with, particularly with middle age/old people with natural age related eyesight. CFLs also produce a cold light free of the infra red spectrum (this is the bit that feels warm on exposed skin). Unfortunately CLFs also do not take well to dimming their light output to a warm orange glow to watch the television or similar.

Government incentives could not however fail on this one! After all, the rest of the world is doing the same thing with CFLs. In a frenzy of ‘keeping up’ with reducing the national carbon footprint, the UK government decided to actually ban the import of the old Edison bulbs. Very costly persuasion had failed so it was time for brute force!

Laboratory testing of the Edison bulb showed that only 5% of the wattage input is converted into light. The remaining 95% of the Watts was lost in heat. This was looked upon by government as a totally dismal efficiency for a domestic device.

It is unfortunate that joined up thinking did not ‘click in’ with government or the technical advisers at this time and so the Myth began.

The Edison bulb is actually a background room heater which also happens to emit a superb bright, warm, easy to read light that CLFs could never achieve. The rapidly advancing LED lighting will also fall short because of their lack of the infra red heating content.

The typical house in the UK now is fully insulated (with the help of government grants) and has double glazing. The ‘wasted’ heat of the Edison bulb is not lost at all! It is well contained within the house. In the winter months, it contributes to the heating of the house, allowing the central heating system to automatically shut down a little. In the summer months, we go to bed in daylight conditions and we get up in daylight conditions so we don’t need to use significant amounts artificial lighting. Autumn in the UK brings cooler temperatures that the background room heating of the Edison bulb may well be all that is necessary.

To introduce a hypothetical situation at this point may help.

The identical house with Edison bulbs however finds that because of the background heating of Edison bulbs, the central heating is consuming lower power.

This is not ‘rocket science’ but the total energy input to each house would be the same. It is difficult to see where any significant saving in national power consumption is going to be achieved with CFLs.

The typical UK climate has much to do with the above thoughts. Countries with a similar climate to the UK, or colder climates would also experience a similar lack of significant national energy saving by switching to CFLs.

It would seem that for half the planet including the UK, the energy saving light bulb is a Myth. The give-away schemes have not worked here in the UK and hundreds of millions of pounds have been wasted so far. It is time for a rethink, some common sense and perhaps simple media education about lighting.

Alexander Bischoff at the ‘open4energy’ website has expressed an opinion on these notes at:-

If you ban the use of the Edison bulb in domestic housing, why not ban the use of Fan heaters, oil filled radiators, convector heaters, infra-red heaters and electric storage heaters? They all consume twenty to thirty times more power!

The heat produced by an Edison bulb stays within the house and helps heating!

95% of the seven kilowatt heat of an electric shower is lost down the plughole!

The washing machine keeps dumping its two kilowatt heat down the drain!

Big televisions use more energy than an Edison bulb!

When the light produced by an Edison bulb falls on the surface of a wall or furniture, it instantly turns to heat within the room. That makes the Edison bulb 100% efficient as a room heater!

Banning the Edison bulb to save power (UK) is like the transport minister banning mopeds to save petrol!

How much does it cost to change a light bulb? Well in the UK alone, it’s cost us one thousand million pounds so far and still counting!

Banning the Edison light bulb has cost the UK nation a billion pounds, the estimated saving of energy to each household is close to zero!

An electric cooker consumes up to seventy times the power of an Edison light bulb!

Motorway lighting wastes millions of watts, why not disable every other one!

90% of the lighting of a car at night is wasted heating up the atmosphere!

A 750 watt microwave actually consumes one and a half kilowatts!

Toasting a single slice of bread wastes 50% of electricity! (Estimated millions do this each morning!).

CFLs use around 4mg of mercury per bulb (a health hazard). Necessary full recycling in quantity will be costly! Only 23.5 million CFLs were recycled 2008. Many more were binned and probably ended up in landfill!

Tesco stores were still passing on ‘free’ CFLs at 8p each! (Feb 2011) …….unfortunately this practice prevented free enterprise and the start-up of businesses involved with the supply of lighting bulbs. It’s also a problem for existing domestic lighting suppliers. Not good for job creation or business start-up!

A strange thing!….the use of CFLs in your house causes the central heating to work a little harder and therefore use more gas. Guess what….’British Gas’ has been sending out packs of CFLs (52 million bulbs!) to their customers!

15 Edison bulbs used in an average UK household in 2010 cost around £5.70…….the cost of the same quantity of present day LED equivalent replacements cost around £150 and don’t save household energy cost. Manufacturers in China can’t believe it! 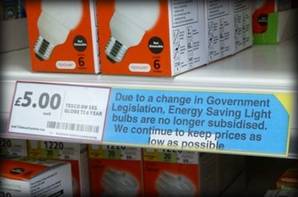 FORTUNATELY ! (June 2011) the UK government has at last seen the idiotic logic in which One Billion Pounds of UK peoples money was spent on banning the import of ‘The Edison Light Bulb’. Latest UK Government legislation has now prevented any further subsidisation of ‘FREE Energy Saving light bulbs’ by the power supplier companies. Distribution of free CFLs through supermarkets has also been stopped. Unfortunately this latest legislation only goes part way to ‘getting back to square one’. THERE IS ABSOLUTELY NOTHING WRONG WITH THE USE OF EDISON LIGHT BULBS here in the UK but the ban still exists.

And another strange thing!.....The ‘Energy Saving Light Bulb Myth’ has been around on the web for nearly two years now. Not a single person has questioned the ‘thoughts’ and logic of these notes! Considering the fact that these notes constantly come up on the first couple of pages of a significant Google search……then it must be that all the readers ‘that really do know better’ are reluctant to get involved with the squandered one billion UK pounds of the UK publics money. My local DIY store still has Edison bulbs for 35p. Soon these will be gone forever and we will be paying around £3.00 for replacements that don’t really save household energy consumption here in the UK. (OK, sweep it under the carpet and it may go away ??).

The solution of the Edison light bulb Myth is simple, allow UK import or manufacture of the bulb providing that the packaging states ‘FOR INDOOR USE ONLY’.

and on the shelf, selling at just 37p each were Genuine Edison

Reckon the home of BMW and AUDI have seen the light (well before us twits!)